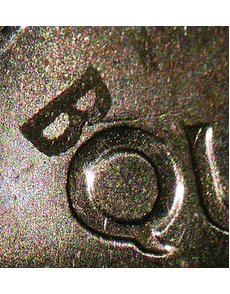 In this 1999-D Connecticut quarter dollar, an embedded dropped letter B (from LIBERTY) sits next to the Q of QUARTER. 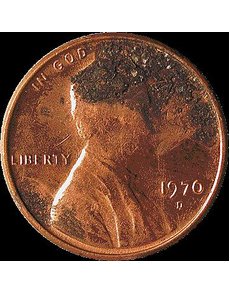 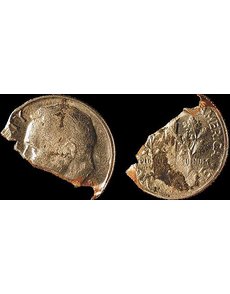 Irregular patches of embedded die fill appear on both faces of a dime struck on a damaged planchet.

The frequently used term “struck through” functions as a nonspecific moniker for coins struck through just about anything.

The most common kind of struck-through error involves coins struck through lubricant or a mixture of lubricant, dirt and metal dust. The terms “grease strike,” “struck through grease” and “filled die error” are typically applied to such mishaps.

When the die face is coated or clogged with this material, design details strike up poorly or not at all. Grease strikes can be highly localized or can affect the entire die face. Both faces of a coin may be affected.

The term “grease” is something of a misnomer. While the substance can be smooth and viscous, it can also be very hard and brittle. This is why I prefer the nonspecific term “die fill,” which accommodates the full range of textures and viscosities.

Every so often, hard, compacted die fill winds up embedded in a coin. On these occasions we’re able to assess the color and texture of the encrusting substance.

A “dropped filling” error occurs when a plug of compacted die fill falls out of a recess in the die face (usually a number or a letter) and lands on a planchet. Usually the plug falls out of the coin after the strike. In the illustrated 1999-D Connecticut quarter dollar, the plug is retained. This “dropped letter” represents the B of LIBERTY. The black color is characteristic of embedded die fill.

Two large patches of embedded die fill are seen on the obverse face of the illustrated 1970-D Lincoln cent. The larger patch covers the top of Lincoln’s head and the words WE TRUST. The smaller patch obscures the back corner of Lincoln’s coat and the adjacent field. The black material is very coarse and granular. A few microscopic silvery flecks suggest the presence of metal dust.

The lower portion of Lincoln’s face lacks detail and is slightly recessed. Here the die fill failed to adhere to the coin. Instead we see the typical appearance of a “grease strike” — hazy details with a very indistinct border separating the struck-through area from the unaffected surrounding surface. Coins that are struck through pieces of metal or other debris typically show sharply-defined borders.

Our next example is an undated Roosevelt dime with a ragged edge. The blank or planchet that became this coin was severely damaged before the strike. Over 50 percent of the planchet (by weight) was pinched off or torn off by a piece of machinery. Embedded die fill is seen on both faces, with the largest patch located on the reverse face. Surrounding areas show the effects of having been struck through die fill. The design is muted and the texture somewhat rough. The black die fill once again shows a very coarse, granular texture. A few silvery and coppery flecks hint at the presence of metal dust in the mixture.

Neither the 1970-D cent nor the undated dime shows any raised design elements on the surface of the embedded die fill. This is always the case, in my experience.

And yet it’s a counter-intuitive finding. As die fill accumulates it should fill the recesses in the die face. Transferred to a coin at the moment of the strike, it should display a raised image, just as a cast counterfeit coin captures the details of its mold. Perhaps the die fill within each recess simply remains behind. Or perhaps the chunk of die fill shifts position after falling out, and the raised letters are demolished during the strike.

What is clear from these and other examples is that, after it’s “set,” this form of die fill is so hard that it has no capacity for plastic flow. When struck, it fails to rise into the recesses of the die face.

In the undated dime, the co-occurrence of embedded die fill with severe planchet damage suggests that some planchets may arrive in the striking chamber already carrying black encrustations. If so, a logical source would be the rollers used to reduce coin metal strip to final thickness. Dirty rollers could transfer their compacted grime to the coin metal strip. But right now there’s no way to distinguish between the two possible sources of dark, scabby material.