Some books narrow the focus to a single coin 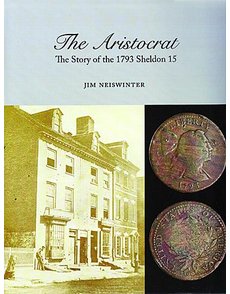 The Aristocrat: The Story of the 1793 Sheldon 15 by Jim Neiswinter is a good addition to a personal library.

We call them “coin books,” but wouldn’t it be more accurate to say “coins books”? Nearly every such volume covers many coins.

For example, A Guide Book of United States Coins by R.S. Yeoman and edited by Kenneth Bressett, the “Red Book,” catalogs hundreds of different U.S. coins, from half cents to double eagles.

But few volumes — they can be counted on your fingers — are written about just one coin. Such coins are something special, and so are the books that describe them. Buy all nine of them, and you have an impressive mini-library or a dynamite show exhibit.

Best of all, none are rare, so all can be purchased for a total of less than $100. The first, published in 1962, is Eric P. Newman and Kenneth Bressett’s The Fantastic 1804 Dollar, which demonstrated that some of these dollars were made as diplomatic gifts, while others were struck surreptitiously by Mint employees for profit.

Next is Pete Smith’s The Story of the Starred Reverse Cents, published in 1986, which explained the discovery and probable reason for the creation of the variety of 1794 Liberty Cap cents with 94 minute stars encircling their reverse rims.

Only these two single-coin books were written during the first 150 years of coin collecting as a mass hobby in the United States, but for reasons unknown, starting in 2004, the single-coiner pace accelerated to one per year.

The surprising reappearance of 10 1933 double eagles from a Philadelphia safety deposit box, and the sensational legal battle over them, inspired two books, David Enders Tripp’s Illegal Tender: Gold, Greed, and the Mystery of the Lost 1933 Double Eagle (2004), and Alison Frankel’s Double Eagle: The Epic Story of the World’s Most Valuable Coin (2006).

In 2007, another coin was spotlighted by two books published only months apart. The first of these, 1794: The History and Genealogy of the First United States Coin, sought to illustrate and trace the provenance of every one of the 134 survivors of the 1,758 silver dollars coined in 1794. Unfortunately, the coauthors, Jack Collins and Walter Breen, both died before they could complete their manuscript. In honor of their brilliant work, George Frederick Kolbe published the unfinished manuscript. Later in 2007, Martin Logies wrote and published a similar treatment, titled The Flowing Hair Silver Dollars of 1794.

The next single-coin book was Dean Albanese’s King of Eagles: The Most Remarkable Coin Ever Produced by the U.S. Mint (2009). This work focused on the Proof 1804 Draped Bust, Plain 4 eagle, a “cousin” of sorts of the 1804 dollar, for it, too, was manufactured as a diplomatic gift. King of Eagles is the most commercial of these one-coin books, making the case for this eagle’s investment potential.

Most recently (2013), Jim Neiswinter wrote The Aristocrat: The Story of the 1793 Sheldon 15. Called “an aristocrat of aristocrats” by Dr. William H. Sheldon, this cent variety receives Neiswinter’s lavish attention; he thoroughly traces every survivors’ appearances at auction, documenting them with beautiful color photographs.