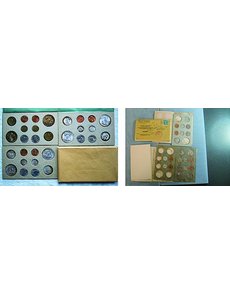 One collection appraised by columnist Gerald Tebben included double Uncirculated Mint sets like those pictured, albeit with quarter dollars missing due to the owner’s affinity for playing poker.

I don’t do many appraisals, but sometimes a friend cannot be denied, or an opportunity comes along that is just too good to pass up.

I salivated for days before appraising the collection of a banker. His family had been involved in the business for a century, so I couldn’t wait to have a look.

When I walked into his office, his secretary had already opened the big safe. I took a metal box out and started to worry when I heard the sound of sliding coins as I placed the box down on a gigantic desk.

In the bottom were 50 to 100 shiny World’s Columbian Exposition half dollars, each with more than 100 years of scrapes across Columbus’ face and the Santa Maria’s sails. Next I spied a pile of double Uncirculated Mint sets from the early 1950s. But, as I opened each one, I saw that something was missing. The quarter dollar holes were blank.

The late banker’s secretary explained that he liked to play poker with his buddies and punched out the quarter dollars when more coins were needed. Some of those quarter dollars were sliding along the bottom of the metal box, too.

Another banker’s estate yielded $30 to $40 face value in U.S. gold coins. His daughter-in-law said that whenever a gold coin came across the counter — a rare, but not unheard of event at his immigrant-neighborhood New York City bank in the 1950s and early 1960s — he replaced the coin with paper money and put the piece aside. Gold at that time was worth, by government decree, $35 an ounce, allowing the late banker to nearly double his investment immediately.

Most of the coins were placed in an old-fashioned money envelope. One, though, was set aside in a glassine envelope inside a regular envelope. A notation on the yellowing outer envelope said the coin was a rare gold dollar worth at least $1,000. Dreams were dashed when I opened the envelope. The rare coin was a 1960s counterfeit that was probably brought into the country from the Middle East by one of the banker’s customers.

Another estate involved hundreds and hundreds of rolls of Lincoln cents. Some were in plastic tubes, others in paper rolls. None were Uncirculated and most had been minted since 1959. Their late owner apparently kept every cent he ever came across and separated them by date and Mint mark.

Their new owner was a bit upset when I told her they were worth nothing more than face value. Neither of us could figure out why they had been saved and separated.

I’ve always liked coins, but all the same, I’m glad I didn’t have to try to figure out how to get rid of hundreds of dollars in cents.