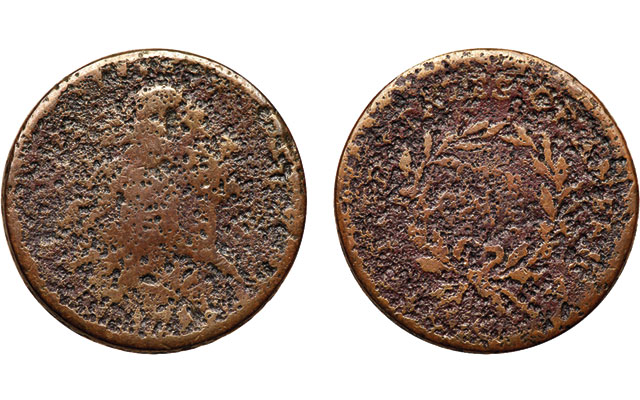 The grading term “Basal State” is the lowest level of preservation described in Penny Whimsy by William H. Sheldon. The author introduced the term in a chapter called “Toward a Science of Cent Values” where he proposed a valuing system for pricing large cents that directly related condition and rarity. His 1 to 70 scale is used in coin grading today, where 1 is the lowest and 70 is essentially perfect.

This 1793 Flowing Hair, Wreath cent is graded by the auctioneer as Basal State 1+, and the firm notes that by way of details alone, it is several grading points sharper, but is covered with moderate porosity. “The roughness weakens and distorts the designs but the date remains readable as does much of the legend on the reverse,” the description adds.

While the date is not readily visible, it is identifiable as a Vine and Bars Edge variety and is classified as the Sheldon 10 die variety in Sheldon’s book.