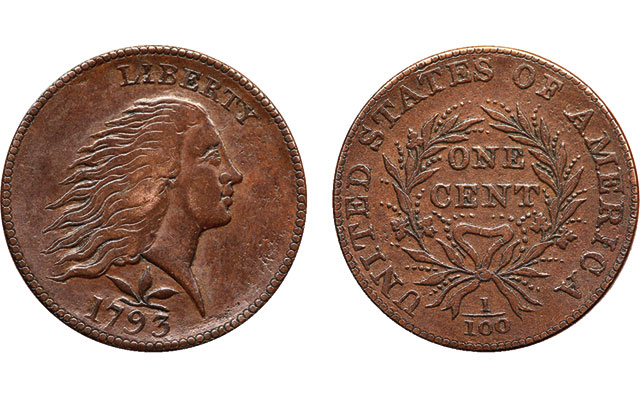 This “Smith Counterfeit” 1793 Flowing Hair, Wreath cent is actually a well-worn genuine coin that has undergone extensive modifications to make it appear finer than it is. It sold for $2,585.

The “Smith Counterfeit” is a curious 19th century numismatic oddity. Coin World’s Paul Gilkes wrote in his Dec. 2, 2013, feature on contemporary counterfeits, “The Smith counterfeits were heavily circulated 1793 and 1794 cents that engraver William D. Smith — known as Smith of 1 Ann Street in New York City — re-engraved in the late 1850s and early 1860s to resemble higher grade 1793 cents. Some collectors suggest the Smith counterfeits are not counterfeits at all, but simply alterations to genuine U.S. Mint cents.”

Smith would begin with a well-worn host coin, and he extensively reworked both sides. The description notes that the present piece has a weight of only 157.1 grains, versus the standard 208.0-grain weight of a typical 1793 Flowing Hair cent, showing just how much metal was removed during Smith’s handiwork.