Market starts to sort itself out for gold Kennedy after 'hoopla' 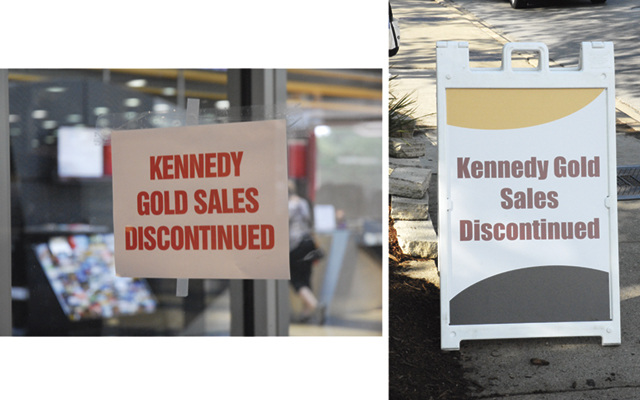 Collectors and others seeking hoping to buy the gold Proof Kennedy 50th Anniversary half dollar Aug. 8 and 9 at the ANA World’s Fair of Money were greeted with these signs the afternoon of Aug. 7 when the U.S. Mint suspended sales at the venue.

Many collectors remain upset over the hoopla involving the Mint’s release of its gold 2014-W Kennedy half dollar at the American Numismatic Association’s show and at several Mint facilities.

What fails to be mentioned is that thousands of collectors who ordered their coins directly from the Mint’s website were in and out in less than half an hour and received their coins a week or two later.

A look at mintage figures shows that the sales have slowed down tremendously. Consider that more than 57,000 coins were recorded sold on Aug. 5, the first day that the coins were available. Through Aug. 17, the total is just 63,521.

A lot has been written about the huge sums paid for the first few coins. These massive prices have succeeded in attracting mainstream attention to these coins to create demand for those gold half dollars released in the first few days as certified by major grading services.

But for prices to remain high, there needs to be sustained demand. The coin market is smart, and has a way of sorting these things out.

A look at some recent auction results shows that the extreme premiums that characterized the first days after the ANA show are starting to fade. For example in an Aug. 18 eBay auction, a Numismatic Guaranty Corp. Proof 69 Ultra Cameo “First Day – Chicago ANA” coin brought $1,736.

Once the cost of grading is taken out, and considering that these coins were selling uncertified for $2,000 at the show on the first day, that coin could represent a loss for the original buyer.

A comparably graded Proof 70 example brought just over $3,000 the day before in an eBay auction. For comparison, these were regularly selling at $2,500 and $4,500 respectively the week before in eBay auctions.

In reading some collector commentary across the Internet, I’ve seen a few collectors blame hobby publications, including Coin World, for creating the demand by showcasing the excitement at this past March’s Baltimore Expo where the 2014 Baseball Hall of Fame coins were released.

There, a 12-year-old Baltimore Orioles fan created a picture perfect opportunity when he was first in line to buy the coin. The subsequent premiums paid for the first Baseball coins released at the Baltimore Expo have been widely reported here and elsewhere.

If providing coverage of this major event in the hobby can be blamed for the fiasco with the Kennedy first releases, Coin World will gladly shoulder some of the blame. We wouldn’t be doing our jobs if we ignored an event that ignited a major trade show and involved a hugely popular new Mint issue.

I’m curious as to how long this negativity towards the gold Kennedy half dollars will last. If it extends through the end of 2014, we could see lower than expected mintage levels that could make this handsome coin scarcer than originally expected.