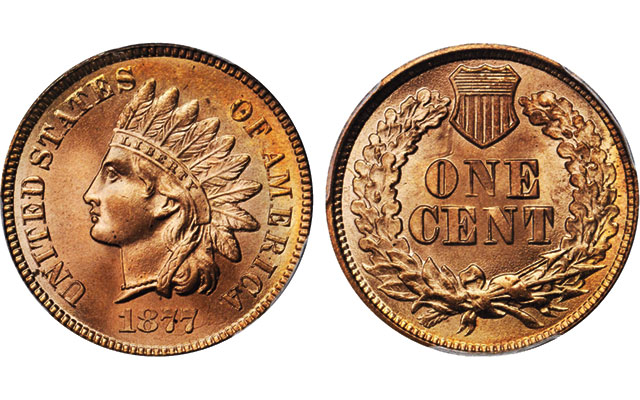 Stack’s Bowers Galleries annual Americana Auction, held this year Feb. 5, 6 and 10 in New York City, never fails to introduce new discoveries to the marketplace. The auction was anchored by the Stephen Winthrop collection, which realized $1.3 million. Those funds will be donated to further ALS research — often referred to as "Lou Gehrig's Disease" — through Harvard University’s ALS Initiative.

With its relatively low mintage of 852,500 pieces, the 1877 Indian Head cent is a key issue in the series, and even well-worn, problem-free Good 4 examples can approach $1,000 in price.

This one, graded Mint State 65+ red by Professional Coin Grading Service, with a green Certified Acceptance Corp. sticker indicating quality within the grade, sold for a robust $99,875. It is the sole PCGS example in this grade with only six examples graded MS-66 red and none graded finer by PCGS.

It is described as having the look of a later, common date Indian Head cent with both sides “bursting with a satiny rose-red finish, isolated peripheral areas further enhanced with splashes of equally vivid golden-orange iridescence.”

The description added that the piece was fresh to the numismatic marketplace and had sat in a private collection for more than 50 years.

Unusually toned half dollar sells for just over $3,000 at Americana Auction