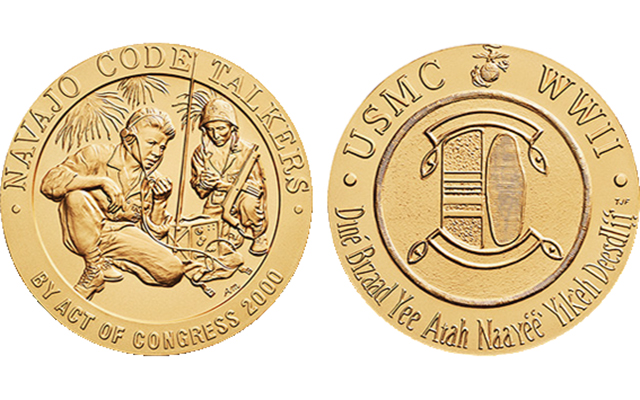 Bronze duplicates of the congressional gold medal awarded in 2000 to the 29 original Navajo Code Talkers are available for purchase from the U.S. Mint.

Chester Nez, the last of the original 29 Navajo men who served as “Code Talkers” in the Pacific theater of World War II, died Wednesday at his home in Albuquerque, N.M., according to CNN.com.

Nez and 28 other Native Americans from the Navajo tribe were recruited by the Marine Corps during World War II to develop a secret language that could be used during battle and not be cracked by the Japanese code-breakers.

The group of Navajo code talkers swelled to over 300, CNN reports.

The U.S. Mint stocks bronze duplicates of the congressional gold medal awarded to the original Navajo Code Talkers in 2000 in both 3-inch and 1.5-inch sizes.

The obverse of the medal features two Navajo Code Talkers sending a radio message surrounded by the inscriptions, NAVAJO CODE TALKERS and BY ACT OF CONGRESS 2000.

The last inscription in English means “The Navajo Language Was Used to Defeat the Enemy."

The 3-inch medals can be purchased on the Mint’s website for $39.95. The 1.5-inch variety is priced at $6.95. The medals are a part of the Mint's Native American Code Talkers series, which commemorates service members from numerous tribes who were code talkers during both world wars.

Code talkers in World War I and World War II came from numerous tribes other than the Navajo, according to the Native American Encyclopedia, including the Choctaw, Kiowa, and Sioux. Some of those code talkers used Type Two Codes, which were simply English messages translated into their languages.

"However, the Navajos, Comanches, Hopis, and Meskwakis developed and used special codes based on their languages. These became known as Type One Codes,” Native American Encyclopedia explains. "To develop this type of code, the original 29 Navajo Code Talkers first came up with a Navajo word for each letter of the English alphabet. Since they had to memorize all the words, they used things that were familiar to them, such as kinds of animals. Obviously this type of code was far more complex and created even more difficulty for the enemy to try to decipher.”

Nez was recruited in 1942 and worked with his fellow Navajo recruits to develop the code at Camp Pendleton. He was shipped to Guadalcanal the same year, and also fought in Guam and Peleliu, CNN reports. He was discharged in 1945 but volunteered to serve in the Korean War, as well.