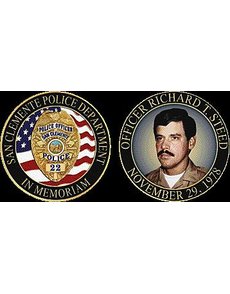 A medal from San Clemente, Calif., honors officer Richard Steed, who died while on duty in 1978.

An officer who died in the line of duty is now being honored with a “challenge coin.”

San Clemente, Calif., is featuring officer Richard Steed, who was shot and killed Nov. 29, 1978, while responding to what was believed to be a medical assistance call from someone who allegedly slashed his wrists, according to ODMP.org, the Officer Down Memorial Page website.

The killer was James R. Hoffer, a transient with a history of mental illness, according to a 1996 article in the Los Angeles Times.

Officer Steed, then 30 years old, had served less than two years with the department, after serving with the United States Marine Corp. His wife, Kathy, survived him.

Net proceeds from sales of the medal will be donated toward a scholarship in Steed’s memory.

The medals measure 1.75 inches in diameter and are struck from a brushed brass metal, according to Community Service Officer Stephanie Jones. They are being struck for the department by Recognition Services, and feature color in the design.

Officer Steed’s badge appears against an American flag backdrop on the obverse, with SAN CLEMENTE POLICE DEPARTMENT and IN MEMORIAM surrounding.

The reverse shows a full-color lithographic portrait of officer Steed surrounded by his name and title, and the date he died while in service.

The medal does not have a mintage limit, but the number struck will depend on the amount of orders received by Nov. 18.

The medals are priced at $10. Any orders by mail should include enough to cover postage and packaging.