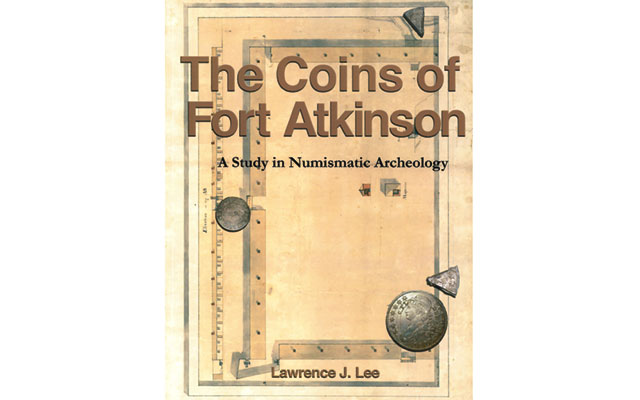 New book by Lawrence J. Lee explores how an archaeological site on the Great Plains can help further numismatic education.

The following is a news release issued by Lawrence J. Lee, former curator for the American Numismatic Association Money Museum and former curator of the Byron Reed Collection of Coins and Documents at the Durham Western Heritage Museum, in Omaha, Neb., concerning publication of his new book, The Coins of Fort Atkinson: A Study in Numismatic Archaeology, financed through a grant from the Central States Numismatic Society. Lee will be signing copies of the book April 22 and 23 at the CSNS convention at the Renaissance Schaumburg Convention Center in Schaumburg, Ill.:

A new book by the former curator of the ANA suggests that the field of numismatics has much to offer modern scholarship, despite the lack of accredited numismatic educational programs in the United States. In The Coins of Fort Atkinson: A Study in Numismatic Archeology, Lawrence J. Lee argues that the distain towards coin collecting expressed by the archeological community is misplaced, and that numismatists can make a solid contribution to cross-disciplinary academia.  Lee uses the coins recovered from Fort Atkinson as a model for doing so.

From the book’s abstract:

“Although called both 'a very exacting science' and 'an academic discipline,' the field of numismatics as practiced in America has little recognized scholastic standing. While much of the rest of the world has national numismatic museums and coin cabinets curated by recognized academic scholars, America apparently only has hobbyists and charlatans on late night TV.

"The lack of perceived value for numismatics is particularly apparent in the archeology of the Great Plains, where the indigenous economy was not based on bullion value, where coin hoards like those found on the eastern seaboard are basically non-existent and where coins and other numismatic items are considered to be ‘historic’ and thus intrusive to the prehistory of the region. In such a setting, any numismatic finds are often casually and inexactly described, poorly photographed and left [uninterpreted] as to cultural meaning or context.

"After reviewing the inexact manner in which coin finds have been handled at several Plains archeology sites, this paper reexamines a published, excavated historic site in Nebraska in order to demonstrate the depth and insight a careful re-analysis of numismatic material can add to a site’s cultural as well as historic interpretation.

"Fort Atkinson was at the time of its service (1819-1827) the westernmost fort in America and the earliest settlement in what is now Nebraska. It had a complex, interconnected economy that included fur trade, barter, bullion specie (including coins from many countries and mints as well as U.S. coinage), credit, lay-away plans, soldier certificates, Treasury warrants, Treasury notes, bank drafts, checks and bonds.

"Over one hundred and twenty coins and coin 'bits' were recovered from Fort Atkinson during ten seasons of excavation. This book for the first time described all of the individual coins from a numismatic perspective that adds significantly to the understanding of life on the military frontier and will hopefully serve as a reference tool for future archeological discoveries of numismatic items in the Great Plains region.”

“This is a special archeological site," Lee explained. “The is a U.S. Army post on U.S. Territory staffed by U.S. soldiers being paid mostly in uncirculated silver American half-dollars.”

Some of these half-dollars were then chopped into "bits" by the Army paymaster, which is possibly one of the first times the government cut up its own money to make small change.  These coins and coin bits then circulated around the fort before being lost on-site, only to be archeologically recovered almost 200 years after the fort’s abandonment. One would expect that the majority of coins from the site would thus be American coinage. In fact, Lee found 90% of the coins, including those lost within the fort barracks, were Spanish colonial silver pieces.

As an extension of his 2006 doctoral dissertation on numismatic education in the United States, Lee notes that the research is significant for several reasons. Not only is it an analysis of the coins and coin bits from an important early American historic site with multiple economies, but the book also serves as an example of the methodological structure that all standardized numismatic research needs to follow to be academically relevant: statement of the problem; review of the literature; data collection; data analysis and conclusions and recommendations.

One doesn’t need to agree with the conclusions, Lee says, as long as the data behind the conclusions is available for others to replicate and evaluate on their own. He notes numismatists have developed a literature and terminology that modern archeologists would profit greatly from understanding and using. Lee also challenges archeologist to question some of their own assumptions about the use of wampum on the Great Plains, how and why coins are holed and whether holed coins necessarily mean they were used as decoration by Native peoples as is the default assumption.

The book The Coins of Fort Atkinson is priced at $24.95 plus $2.95 postage ($27.90 total) and is available exclusively from Deibus Noe Publishing, P.O. Box 6171, Lincoln, NE 68506. Nebraska residents must add an additional 7% sales tax on each book. Payment can be made by check or money order, no credit cards accepted. PayPal may be an option. A publisher’s discount is available for orders of 10 or more copies. Lee can be contacted at lee@athena.csdco.com.