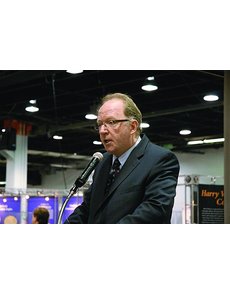 American Numismatic Association Executive Director Larry Shepherd has been placed on administrative leave for 30 days, with pay, pending the results of “an organizational review process,” according to ANA President Tom Hallenbeck.

Hallenbeck confirmed to Coin World that the action was approved by the newly installed ANA Board of Governors during an executive session Aug. 20 as a part of its first meeting in Rosemont, Ill., on the final day of the World’s Fair of Money.

However, the action was not publicly disclosed until the ANA issued a two-paragraph news release, received by Coin World at 7:48 p.m. EDT Aug. 23.

Unconfirmed reports indicate that two other staff members working at ANA headquarters in Colorado Springs, Colo., have also been placed on administrative leave.

Hallenbeck said Aug. 24 that he could not comment — “confirm or deny” — any information regarding others employed by ANA because it would be a “personnel matter.”

However, Hallenbeck did confirm published reports that Employer’s Resources of Colorado is conducting an investigation relating to personnel issues. ANA has for a number of years contracted with ERC for the human relations functions related to staffing matters.

Hallenbeck said that no one has been designated to act in Shepherd’s capacity.

“He is still our executive director,” Hallenbeck said.

The ANA president noted that Kimberly S. Kiick is the senior administrative manager at ANA headquarters and staff members are continuing to perform their jobs as usual.

Shepherd, 61, was named executive director of the ANA March 7, 2008, and signed a one-year contract. However, the ANA Board offered him a five-year extension in October 2008, which he accepted.

Prior to Shepherd taking the executive director position, ANA had posted five consecutive years of budget deficits, totaling $4,167,285, most of which occurred during Cipoletti’s tenure, which began Jan. 1, 2003.

Shepherd, a life member of the ANA with more than 40 years experience as a collector and nearly 20 years as a coin dealer — as well as a management background in finance and investing — promised financial and organizational reform.

In February 2011 Shepherd reported the association’s audit showed a budget surplus of $1,358,000 and that ANA had experienced a $3.2 million gain in overall investments.

The ANA, according to the audit, had more than $8 million in cash and liquid investments, and bills were being paid out of current revenue.

Valuation of ANA holdings, including the library and museum, totaled more than $66 million, Shepherd said.

Shepherd said no funds were removed from endowments during the 19-month audit period. In fact, some revenue was actually put back into endowments that had been removed during previous years, he said.

The recently concluded Aug. 16 to 20 World’s Fair of Money staged in Rosemont was hailed by both ANA Board members and hobby leaders as the largest and one of the most successful annual conventions ever held by the congressionally chartered nonprofit educational organization dedicated to encouraging people to study and collect money and related items.