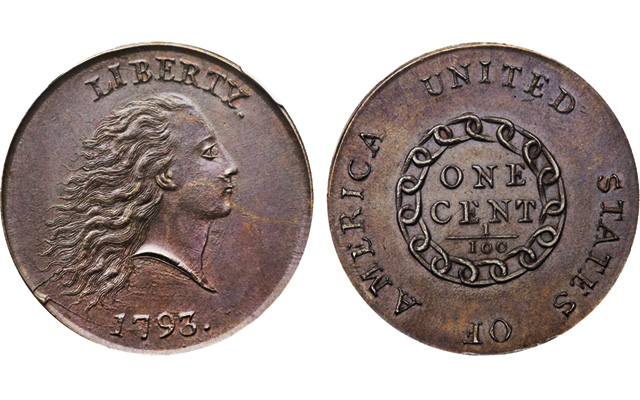 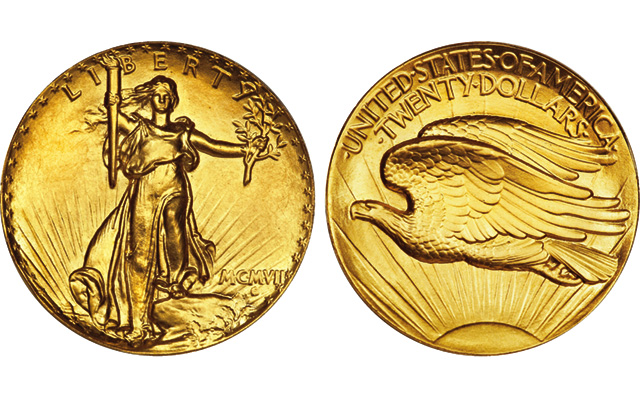 In total, the auction brought just over $28 million, but that does not include the Donald G. Partrick Collection, highlighted by a group of 1792 pattern coins from the early U.S. Mint, which was sold on Jan. 8 in a single-owner sale.

One of the first lots offered, a 1793 Flowing Hair, Chain, Periods cent, graded Mint State 66 brown by Professional Coin Grading Service with a green Certified Acceptance Corp. sticker, sold within the first few minutes of the auction, for $2,350,000 to an Internet bidder. The sale was the coin’s first auction appearance since 1890, and the price makes it the eighth most expensive numismatic item sold by Heritage.

In chatting with several dealers during the auction, one commented that he never thought he’d see the day when a Chain cent would sell for more than an 1804 Draped Bust dollar. The Garrett Class III 1804 Draped Bust silver dollar brought $1.88 million at the Stack’s Bowers Galleries Aug. 6, 2014, Rarities Night auction in Rosemont, Ill., and an 1804 dollar is — at least as of the morning of Jan. 8 — the ninth most expensive coin sold by Heritage, with the firm having sold the Adams-Carter Class III 1804 dollar for $2.3 million at a 2009 sale.

The second most expensive coin in the FUN Platinum Night auction was a 1907 Saint-Gaudens, Ultra High Relief double eagle with inverted edge letters and the designer’s initials, ASG, on the edge. It sold to a phone bidder for $2,115,000. The piece had been graded Proof 68 by both PCGS and Numismatic Guaranty Corp.

Heritage added that the coin’s appearance in the sale was the first time it had ever been offered at public auction, and that it had been off the market since the 1970s.

Heritage’s extensive catalog entry on the piece provides a roster of Ultra High Relief double eagles, describing how the coins were produced in three different striking periods, with four different edge treatments. The first striking period was from Feb. 7 to 14, 1907, the second from March to July 1907, and the third on Dec. 31, 1907. The present example is described as “the only specimen positively traced to the estate of Augustus Saint-Gaudens” and is bested only by an example graded Proof 69 by PCGS that sold for $2,760,000 at a 2012 Stack’s Bowers sale.