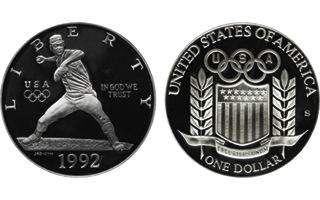 The pitcher on the commemorative silver dollars struck in honor of the 1992 Olympic Games bore an uncanny resemblance to a 1991 Fleer baseball card of Texas Rangers pitcher Nolan Ryan.

The 1992 Olympic Games in Barcelona, Spain, saw the introduction of baseball as a competitive sport. The U.S. Mint held an open design competition for the copper-nickel clad half dollar, silver dollar and gold $5 half eagle that would be issued in celebration of the Winter Olympic Games in Albertville, France, and the Summer Olympic Games. Artist John R. Deecken’s depiction of a baseball pitcher in his windup pose won. Collectors soon noticed a strong similarity between the coin’s design and an image of Nolan Ryan on a 1991 Fleer baseball card (No. 302).

Deecken said the final result was a composite of a number of baseball stars, including Ryan. He told Coin World in 1992, “It wasn’t intended to be him,” adding, “I looked at a number of pitchers, including Ryan, Whitey Ford and other people and arrived at what you see on the coin.”

At the time U.S. Mint officials and a spokesman for Fleer Corp. said that the similarities between the card and the coin design were just a coincidence. The Fleer spokesman said: “It wouldn’t be beyond the imagination especially if you’re concentrating on a particular pitcher. He’s going to repeat positions.” The spokesman further explained that the company reviews thousands of sports photos for possible use on their cards, and that strong similarities of a particular pose are bound to be repeated.

In a Letter to the Editor in the May 18, 1992, Coin World, Orlando, Fla., artist Edward A. Pasquella praised Deecken’s design. He wrote that the face differed in the coin image and on the card, adding: “In an effort to capture this perfect form why not use the perfect pitcher like Mr. Ryan? We should realize how difficult it would be to utilize multiple parts of the body from various sources. The end result could be a slightly distorted figure.” In concluding the letter he wrote, “If I were Mr. Ryan, I would be proud to know that a talented sculptor selected my form for our new Olympic dollar.”

Ryan would have his turn on a coin, but not a U.S. issue. He was the first professional sports figure to be depicted in a “Greats of Baseball” series issued for Liberia starting in 1993 by the Pobjoy Mint in Great Britain.

The Uncirculated 1992 Baseball silver dollar is noteworthy for another reason — its edge lettering, a device last used in 1933 on the Saint-Gaudens $20 double eagle. In this case, the edge lettering was applied by a specially adapted machine after the coin was struck.

The Proof version of the 1992 Olympics Baseball silver dollars has a traditional, reeded edge.