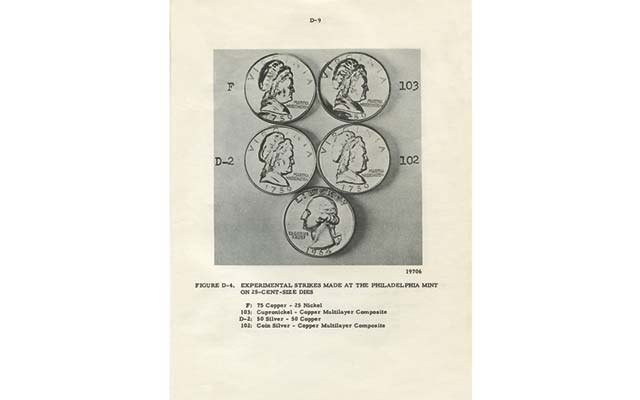 This plate from the Battelle Memorial Institute coinage study shows experimental quarter-dollar size strikes in several metals, including, upper right, the clad composition that was subsequently adopted for use in U.S. coinage. 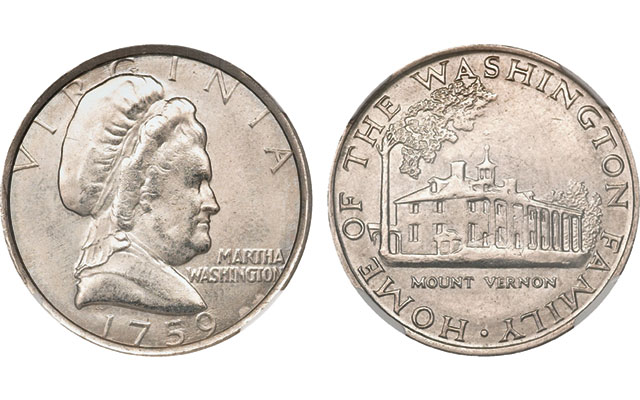 1759-dated Martha Washington “quarter dollar” from the Battelle Memorial Institute test runs at the Philadelphia Mint in the early 1960s. 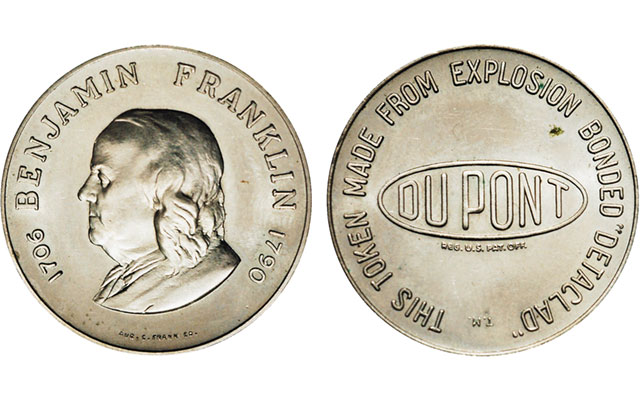 August Frank Co. produced an extensive series of private patterns for DuPont including this “quarter dollar” with Benjamin Franklin on the obverse and a legend on the reverse identifying the composition as DETACLAD.

With the Coinage Act of 1965 realizing its 50-year anniversary, Coin World has a chance to revisit the Coinage Act as its grassroots in U.S. numismatics. Over the 1950s and 1960s, as the public began to show interest, and the price of silver rose, silver would become quite limited. These new dynamics were solved by the use of clad compositions when creating dimes, quarter dollars, half dollars and dollars moving forward.

Read earlier posts in our series on 50 years of clad coinage:

An extensive series of private and Mint patterns was produced in the run-up to clad coinage. Many are known only by footnote in official reports. Others are readily available on the collector market.

Battelle Memorial Institute of Columbus, Ohio, which was chosen by the Treasury Department to study possible replacement metals, oversaw the production of pattern dime-size, quarter-dollar-size and half-dollar-size experimental “coins” in 17 metals.

In its Feb. 12, 1965, Final Report on A Study of Alloys Suitable for Use as United States Coinage, Battelle reported, “A number of possible candidate materials were selected and taken to the Philadelphia Mint in the form of rolled strip to determine how well they could be blanked and upset, and coined. ... For the actual coining process, special dies were prepared by the Mint designers and engravers, which would duplicate as nearly as possible both the obverse and reverse design features of a typical dime, quarter, and half-dollar. “

For the Battelle study, the Philadelphia Mint produced “dimes” in 15 metals, ranging from 50 percent silver/50 percent copper to the adopted copper nickel-clad copper. The “quarter dollar” was tested in 17 metals, and the “half dollar” in just four.

Seven silver alloys and two copper-nickel alloys passed all tests with a “satisfactory” or “coined well” rating. The adopted clad combination was rated “some difficulty” in the upsetting process, but the study noted the resulting surface roughness near the edges could probably be controlled in the rolling and annealing procedures.

Photographs in the Battelle report show a dozen pattern “quarter dollars.” The stainless steel pieces did not strike up well and are noticeably rough at the edges. Several other metals, too, resulted in patterns with poor edge detail. The illustrated pieces all show the date close to the rim. Some pieces that have appeared on the market since show the date closer to the bust.

Only a handful of the original patterns survive, and all but one are believed to be of the adopted clad type. In an April 22, 1975, letter to noted coin dealer Abe Kosoff, Mint Director Eva Adams, said, “to be sure no coins were ‘lost’ while being viewed at official hearings, etc. we had them embedded in a large plastic ‘block’ which no one certainly could ‘pocket’ accidentally or otherwise.

One of these was presented to the Smithsonian Institution.” The Society of U.S. Pattern Collectors’ website, uspatterns.com, reports the Smithsonian has two blue Lucite blocks, each containing a “dime,” “quarter dollar” and “half dollar.”

The pattern website notes two clad “dimes,” ten clad “quarter dollars,” one nickel “half dollar” and about half a dozen clad “half dollars” are known to exist.

Despite their great rarity, the pieces tend to sell for about $5,000 on the rare occasion that they appear at auction.

The International Nickel Co. went after the Mint’s business with a vengeance, even commissioning Kennedy half dollar designer Gilroy Roberts to produce “coinlike” designs for private pattern dimes, quarter dollars and halves. In early 1964, INCO produced an extensive series of private patterns featuring the date 1964 on the obverse and TEST PIECE No. on the reverse.

In late summer, these were supplanted by the Roberts’ designs showing former company president Paul D. Merica (who died in 1957) on the obverse and an aerial view of a lab dedicated in 1964 in his memory on the reverse. Roberts’ famous GR monogram appears on the truncation of Merica’s bust.

These pieces tend to sell for a few hundred dollars apiece. In early 2015, a lot of 58 test pieces from the estate of an INCO official sold for $7,050 at a Heritage Auctions sale.

Philadelphia’s private August Frank Co. mint struck trial pieces in several designs for DuPont. Many of the pieces appear to have been struck with heritage dies from Frank’s vault, including a Benjamin Franklin Federal Savings store card and a 1932 Amelia Earhart medal.

The Battelle report makes passing reference to “nonmetallic coinage materials, such as plastics and ceramics,” but did not evaluate them.

In United States Patterns and Related Issues, Andrew W. Pollock III reports that Corning Glass experimented with translucent glass “half dollars.” The uniface pieces are dated 1964 and show John F. Kennedy and the word LIBERTY, much like the Kennedy half dollar coin. Only one piece is known to exist.

Coin collecting was hot in the early 1960s. Collectors and noncollectors were searching change in the hope of finding rare coins. Investors and speculators were even putting coins away by the bag.

Here are some prices taken from the Feb. 10, 1965, issue of Coin World, which was printed just as Battelle Memorial Institute was finishing work on its report on next-generation coinage.

London’s of Brooklyn was big in the bag market, offering 1962-D Franklin half dollars at $625 a bag, plus shipping.

Check back later this week for more from this series!