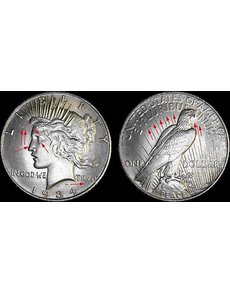 Reed mark depressions, identified by the red arrows, can be found on the obverse of the 1934 Peace dollar that lead ANACS to believe is a struck counterfeit. Arrows on the reverse point to curved tool marks running parallel below the motto, but not through the eagle’s neck. A small depression also appears on the r of pluribus. 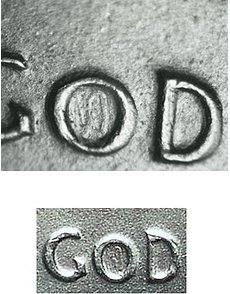 Evidence of oval tool marks can be found inside the o of god on the 1934-dated piece submitted to ANACS, top. Below is the same area showing similar marks on a genuine 1934 Peace dollar in a Professional Coin Grading Service holder sold in a May 24, 2011, Heritage Auctions sale.

Unusual characteristics of a 1934 Peace dollar have some numismatic experts who have examined it divided as to whether it is genuine or a cleverly manufactured counterfeit.

Various abnormalities led members of the ANACS grading staff who examined the submitted coin to conclude they were looking at a highly deceptive counterfeit struck from transfer dies. These include reed mark depressions in the left obverse field and on Liberty’s eyebrow, repeating depressions on the obverse and reverse, and various patches of tooling marks, including some inside the o of god, and an unusual surface sheen when rotated under light

The controversial piece had the correct 90 percent silver composition, weight and specific gravity of 10.3.

The findings of the ANACS staff were published and illustrated in the Oct. 1 issue of Coin World, which was posted online at www.coinworld.com on Sept. 17, the same day the printed publication was mailed to subscribers.

The 1934-dated piece was sent by ANACS for examination, analysis and comparison by numismatic experts at Numismatic Guaranty Corp. a few days before the Coin World article was published, but after the deadline for closing the Oct. 1 issue.

At NGC, President Rick Montgomery, and a member of the grading staff, Scott Schechter, examined the 1934-dated piece. They found evidence of surface contamination from likely having been stored in contact with materials containing polyvinyl chloride (PVC). The piece was referred to NGC by ANACS, but not as a formal submission for which a professional opinion would be rendered, Montgomery said.

Montgomery and Schechter said NGC had in-house a number of genuine 1934-dated Peace dollars, one of which exhibited a number of the characteristics of the 1934-dated piece from ANACS, including the markings inside the o of god, but a later die state.

Schechter said that one piece was from the same die marriage as the ANACS 1934-dated piece, but a later die state.

Schechter conducted additional research and identified three more examples of genuine 1934 Peace dollars in Heritage Auctions’ sales from 2011. Two of those coins were certified by NGC and one by Professional Coin Grading Service, but all three coins exhibit what are believed to be tooling marks inside the o of god.

NGC posted its findings Sept. 18 at its website, http://www.ngccoin.com.

“The subject coin has unusually heavy polish lines on both sides, including in front of Liberty’s face on obverse and in a long band behind the eagle’s head on reverse,” according to NGC. “Its most distinctive feature is on the obverse, where the O in GOD shows heavy file marks within it. But the presence of these features alone is not strong enough to condemn coins showing these diagnostics.

“By contrast, a very strong argument for their authenticity is made by the presence of other examples that have been found in a variety of die states, including examples certified decades ago. It is certainly curious that these die markers have not already been catalogued in the VAM reference, where this variety would likely have achieved some notoriety.”

VAM is the acronym formed from the surnames of numismatists Leroy Van Allen and A. George Mallis, co-authors of the Comprehensive Catalogue and Encyclopedia of U.S. Morgan and Peace Silver Dollars, the primary attribution reference for Morgan and Peace dollar varieties.

The varieties are attributed by VAM numbers.

While Van Allen has not physically examined the 1934-dated piece submitted to ANACS, he is intrigued by it after being provided by Coin World with copies of the Oct. 1 Coin World article and the NGC online article posted Sept. 18.

“An interesting Peace dollar!” replied Van Allen to Coin World in a Sept. 18 email. “Haven’t seen or had reported this 1934 Peace dollar with circular lines in O of GOD. ‘Die file’ or polishing lines are fairly common on Peace dollars. Usually they are fine, closely space produced by emery cloth. But occasionally there have been isolated die scratch lines in the fields of various Peace dollar dates. The circular lines inside O are very unusual and don’t know why U.S. Mint would put them there. Strange that this hasn’t been reported before.”

Van Allen said he would have to physically see the 1934-dated piece submitted to ANACS before he would be able to form a professional opinion as to its authenticity.

Montgomery wanted to acknowledge the cooperation between the two grading services.

“I think you can see from this that we want to acknowledge the cooperation between authenticators yet leave whatever possibility there might be about this coin’s authenticity open until further study can be conducted,” Montgomery said of the article NGC posted online. “We concluded that our comparison coin is genuine, as did Roberts.”

Roberts refers to John Roberts, a Morgan and Peace dollar specialist and ANACS’ attributor for VAM varieties, who examined the ANACS submission. Roberts commented, “The lines inside the O of GOD may not be damning in and of themselves, but I would urge collectors to take a much closer look at any example with this characteristic, and would appreciate the opportunity to personally examine additional examples.”

Roberts offered an additional angle to consider — the possibility that NGC found the die marriage that produced the parent of a spurious coin.

ANACS stands by its assertion that the diagnostics for the 1934 Peace dollar submitted to the grading service suggests a well-made, detailed struck counterfeit.

“Finding another dollar with the same pattern of tool marks/die polish lines certainly makes us stop and reflect,” said Michael Fahey, ANACS senior numismatist. “I still have problems explaining the series of reed marks that have raised lines running uninterrupted through them. This is an effect on a coin that usually tells me ‘bad.’

“As I said in the [Coin World]article, we can never be 100 percent certain about any high quality fake until we have two examples to compare side by side.

“The question is whether to sit on a fake for a while, and let other collectors get burned by them, or publish as soon as we can, and take the chance that we are falsely condemning a given coin. Not an easy choice either way.” ¦