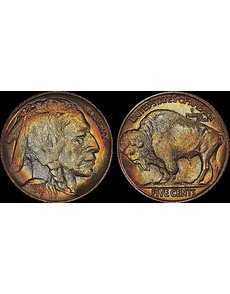 The example was offered during the firm’s Regency Auction IV, which was held in conjunction with the Professional Coin Grading Service’s Members Only Show.

The coin is certified PCGS Secure MS-64, and stickered by Certified Acceptance Corp. with a green sticker.

The price realized includes a 15 percent buyer’s fee and the closing hammer price of the lot.

The doubling on the coin is most apparent at the date, with the top two-thirds of the 16 and top one-third of the 19 the most visibly doubled elements. The bottom portions of the doubled numerals, however, are quite weak or missing.

The Indian’s chin and throat, and the feathers and tie on his braid, also exhibit doubling.

Legend-Morphy partner Dan Morphy said he “was more than pleased with the sale and results. Lot preview was very strong with nothing but positive feedback on the catalog. Laura did a phenomenal job putting together a fresh grouping of exceptionally clean coins. We met a lot of new bidders and buyers, and are already looking forward to putting together a banner sale for December.”

The pattern, composed of nickel and bearing a plain edge, is one of 17 reportedly struck on a single day at the Philadelphia Mint.

The coin was struck during the final year of coinage production at the Carson City Mint in Nevada. It is graded MS-66 by PCGS and considered the finest known.

All prices realized are posted on the Legend-Morphy website at www.legendmorphy.com.

Regency Auction V will be held Dec. 18 at the PCGS Members Only Show at the Venetian in Las Vegas. Consignments are now being accepted.