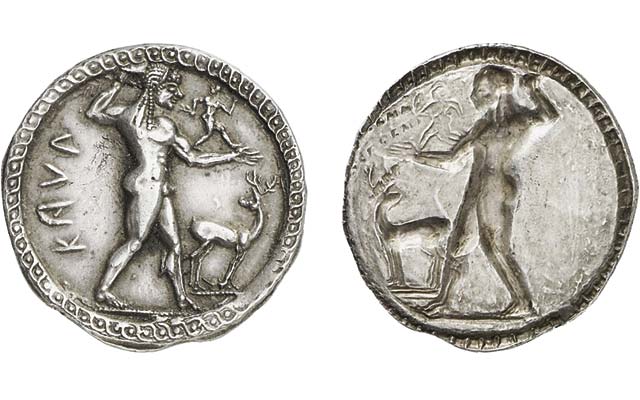 A circa 525 to 500 B.C. silver stater from Kaulonia in Bruttium (southern Italy) is one highlight of Fritz Rudolph Künker’s March 13 ancient coin auction.

An early Greek coin from modern-day Italy returns to auction on March 13.

The circa 525 to 500 B.C. silver stater from Kaulonia, in Bruttium (near the southern tip of Italy), is a highlight of Fritz Rudolph Künker’s ancient coin auction, one of four auctions the firm has scheduled from March 9 to 13.

The coin shows Apollo holding a daimon (a benevolent or benign nature spirit) with a stag (deer) standing, its head turned back.

Kaulonia was one of several Achaian colonies established in Magna Graecia in the seventh century B.C. Kaulonia’s coinage began in the later sixth century, and was one of the many incuse types that marked the beginning of coinage in Italy. Apollo, the patron deity of Kaulonia, and related iconography were the primary design types featured on the coins.

The coin was once part of the famed Prospero Collection, which was auctioned in New York City in 2012. During that auction, conducted by a consortium dubbed “The New York Sale,” the coin realized $22,230, including the 19 percent buyer’s fee.

To learn more about the whole week of auctions, visit the auction house website.