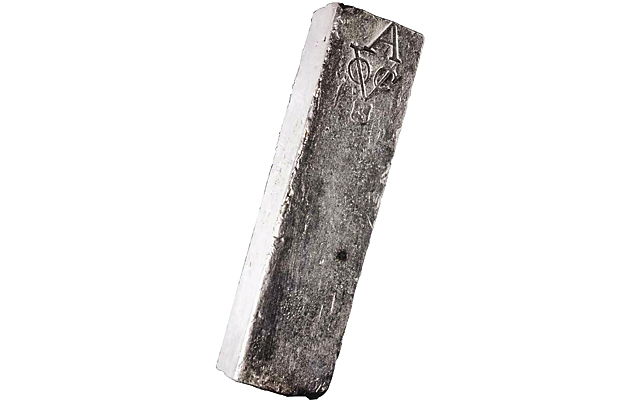 A silver bar from the Dutch East India Company (Vereenigde Oost-Indische Compagnie or VOC in Dutch) was one of several highlights in Schulman b.v.’s July 5 auction.

Few lots have such a rich story.

The silver ingot was recovered from the wreck of the Rooswjik. According to the certificate accompanying the bar, it weighs 75.45 troy ounces (its fineness and other specifications were not disclosed).

The 30-gun VOC merchant ship and its cargo were bound for the Dutch East Indies with some 200 people aboard and carrying 10 chests of silver coins and an unspecified quantity of silver bars on its last voyage. It foundered in a storm in 1739 or 1740 (depending on sources) and sank on the treacherous Goodwin Sands in the English Channel. All people aboard perished in the wreck.

The rise of the VOC in Asia between 1602 and 1799 led to the development of a complex trade network. Ships came back from Batavia, now Jakarta, filled with spices and textiles to sell on the Dutch market, and while Dutch goods weren’t popular in the East, there was strong demand for silver and gold coins and silver bars (like the one in this lot), which came into the trade beginning in 1646, according to the auction house.

This bar bears the Chamber of Amsterdam A mark with the VOC brand, among other markings.

The trip to Jakarta, only the second after the ship was built in 1737 in Amsterdam, was captained by Daniel Ronzieres.

The ship was reportedly discovered and salvaged in 2004. Sales of items from the wreck began in 2005, according to the auction firm.