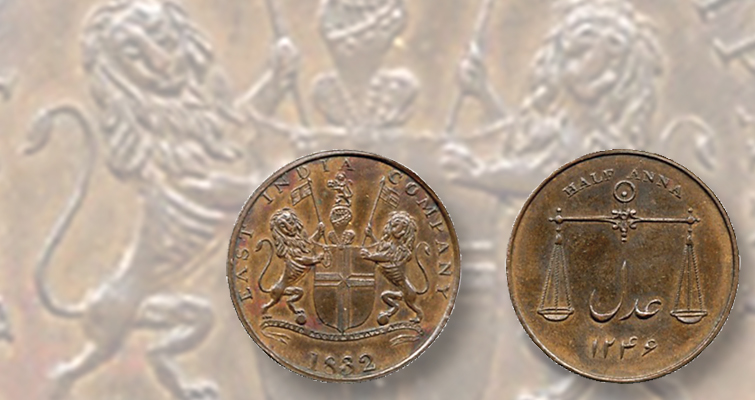 A Proof 1832 bronze half anna pattern sold in Spink’s July 15 auction in London.

The coin was struck in Bombay, India, at the height of 19th century British colonialism, and was found in a British cabinet.

“It has obviously seen some circulation, but the story of its journey from Bombay to England has yet to be discovered,” according to the auction firm.

The pattern coin’s obverse shows the arms of the East India Company and the reverse shows scales of justice, with the denomination in English, and the Hijri date.

A new mint at Bombay started striking copper coins on Nov. 22, 1830. Although the court of directors had authorized the minting of half annas, quarter annas and pie-denominated coins, none were produced for circulation.

However, a die for the half anna was produced by a local engraver, and Proof examples bearing the date 1832 were submitted to the Mint Committee by J. Farish, the mint master, on July 23, 1833. These Proof patterns must have been unsatisfactory, as the Mint committee requested new dies for half rupees be engraved at the Calcutta Mint and sent to Bombay. The 1834 copper coins of the Bombay Mint were struck from these later dies.

Want to learn more about numismatics of British India? Check out these Coin World stories!