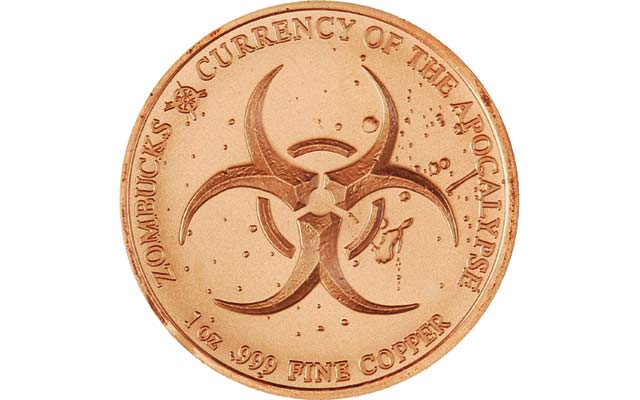 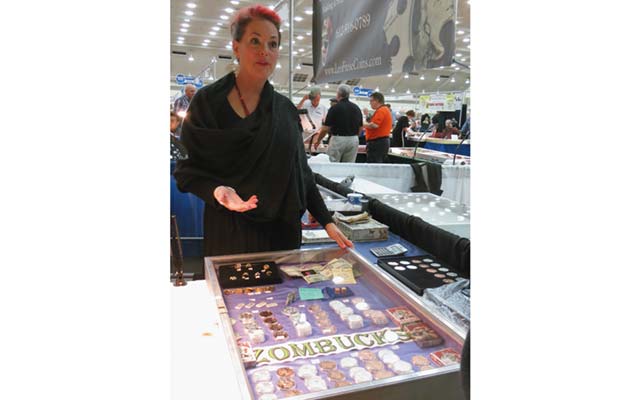 Shaunda Fry, the self-proclaimed “Queen of the Zombucks,” promotes Zombucks, a silver and copper bullion product created by Provident Metals. 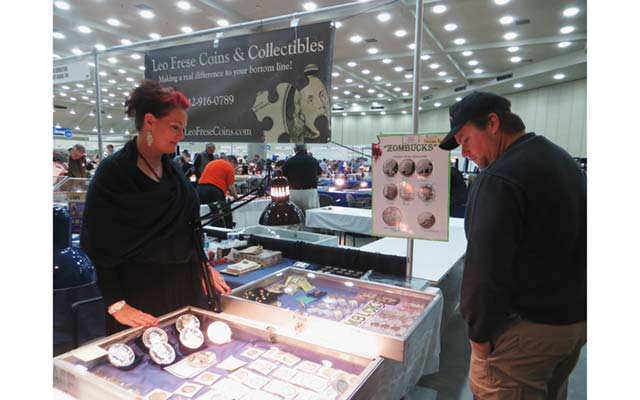 A customer considers the Zombucks designs before making a purchase at dealer Shaunda Fry’s booth during the Whitman Baltimore Coin Expo on March 27. 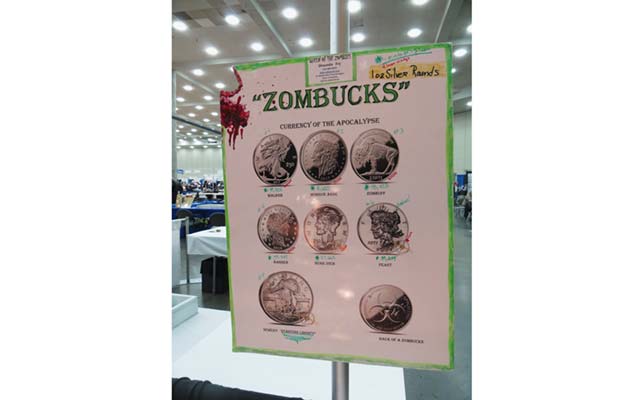 Texas-based dealer Shaunda Fry uses an eye-catching sign to grab attention for Zombucks, the so-called “currency of the Apocalypse.”

Some dealers talk about series with little interest as being “dead” but California-based dealer Shaunda Fry deals in a series that really is dead.

Or at least focuses on death.

Fry calls herself the “Queen of the Zombucks,” referencing the series of Brilliant Uncirculated 1-ounce silver and copper bullion rounds issued by Provident Metals since October 2013.

The eighth design in the series, called the Slayed Dollar, was released April 1. The Slayed Dollars are sold at a price based on the precious metal value of silver plus a surcharge of at least $3, depending on payment method. Copper versions sell for as much as $1.76 per piece, with quantity and payment method discounts.

RELATED: see all of Coin World's stories about Zombucks by clicking here

Some of the Zombucks releases have exploded in value, with earlier issues commanding many multiples of issue price. The most extreme example is the first design, the Walker (a take on the Walking Liberty half dollar), which now retails for about $10 each in copper and $70 or more in silver.

Proof examples of most designs remain available from Provident Metals, but only one current design may be ordered in bullion version at any time.

Fry discussed the series with Coin World during the Whitman Baltimore Expo coin show on March 27.

“It’s one of the hottest bullion collector items you can get,” she said.

Interest in the series is widespread, mirroring the pop culture popularity of television shows like The Walking Dead and iZombie. Movie references to zombies have been around for nearly a century, however.

“The first zombie movie was in 1926. We didn’t have people getting eaten until 1968, in Night of the Living Dead,” Fry said.

The youngest buyer Fry has had was 6 years old, and the oldest was 86 years old, she said.

“That’s how prevalent zombies are in our culture,” she said. “ [Zombucks] are just going to get more popular.”

While Coin World was visiting Fry, a 70-something grandmother bought several Zombucks. A fan of The Walking Dead, she wanted the rounds for herself.

Fry’s “blood-stained” sign (created with nail polish) was embellished with a ripped corner, all to grab the attention of prospective buyers. That mirrors the strategy employed by the issuer, Provident Metals.

The Texas-based company tapped into the horror genre vein, replacing the dollar sign with a Z and employing futuristic dates on the rounds, suggesting a Zombie apocalypse in the not-too-distant future (2017 to 2019 dates appear on the rounds).

The reverse of each round features a zombie-splattered biohazard symbol, warning the world of a dreadful new era.

Playful marketing phrases bounce off the gruesome (act quick, or the consequences could be grave) nature of zombie pop culture.

The firm sells each design for a three-month window, with a total mintage based on sales. When one design is no longer available, that “zombie” is said to be “contained.”

“Order yours today before there is no tomorrow,” the marketing material warns.

Fry became infected with the Zombucks bug after receiving one of the pieces from a friend. The third issue, the “Zombuff,” is a play on the iconic reverse design on the Indian Head 5-cent coin (or Buffalo nickel). The skeletal beast design had her hooked on this so-called “Currency of the Apocalypse.”

Now she sells them at coin shows, sharing space with dealer Leo Frese. Fry said she’s adding a pop culture festival to her travel plans this year, as the series winds down.

The 10th and final issue in the program is set to be available from Sept. 1 to Dec. 31.

After the series closes, Fry expects the Zombucks to have a life of their own.

“After the whole set comes out, they’re really going to soar in price,” Fry said.