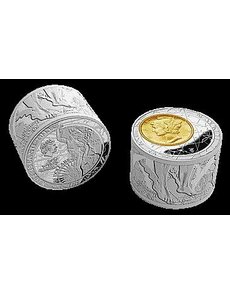 The Mint of Poland has released a cylindrical coin with a design on its edge honoring the Roman god Mercury.

While many collectors pay attention to what’s on the obverse and reverse sides of a coin, the third side may be sometimes overlooked.

A new coin shaped like a cylinder, from the Mint of Poland, aims to change that.

The coin, released Feb. 15, marks a technological milestone, as the edge — measuring some 22.3 millimeters in depth — features a complex design created through 3-D imaging software and laser engraving.

The Proof Fortuna Redux 6-ounce .999 fine silver $50 coin, struck in the name of Niue Island, is intended as a symbol of good luck in business and commerce. The Roman god Mercury, god of tradesman and travelers, is honored in the design.

Mint officials call it the world’s first cylindrical coin struck with a design on the third side (technically, all coins are cylinders, and edge inscriptions are a frequent design element).

According to Siemowit Kalukiewicz, manager of production organization and technical department at the Mint of Poland, the process to make the coins took more than six months, beginning in July 2012. The designs were ready in September but technical issues proved challenging.

“In November, I didn’t think we would be here, that we would be finished,” Kalukiewicz said Jan. 31 at the World Money Fair in Berlin.

Enlarging the third side of the coin gave the designer more than twice the design canvas offered by obverse and reverse alone. Urszula Walerzak created the design using both traditional and digital sculpturing methods, relying on ArtCam software.

ArtCam allows designers to transfer 2-D images into 3-D graphics, giving them the flexibility to sculpture electronically. The designer could, for instance, move a subject’s arm and see the resulting change in musculature and how that would affect the design’s balance.

Innovation overlapped with tradition, however, as the Mint created a plaster model of the feet of Mercury that appear on the edge. Using the software, the model was scanned and added to the design. An Acsys laser program was used to create the dies, and to add microtext and a direct laser hallmark.

The most difficult challenge in creating the design, Kalukiewicz said, was transferring the flat images onto the cylindrical shape. Mint officials settled on using four segmented collar dies to strike the coin. Striking required a reduction in the pressure used for striking a normal collector coin, Kalukiewicz said.

The obverse shows a full-length image of Mercury against a map, with a small version of the Ian Rank-Broadley effigy of Queen Elizabeth II. The reverse will look familiar to collectors of U.S. coins accustomed to calling the Winged Head Liberty dimes “Mercury” dimes — the design is reminiscent of the dime’s portrait. The portrait is gold plated. The edge shows Mercury’s winged feet against maps.

The coin has a mintage of 2,500 pieces. Prices are unavailable.