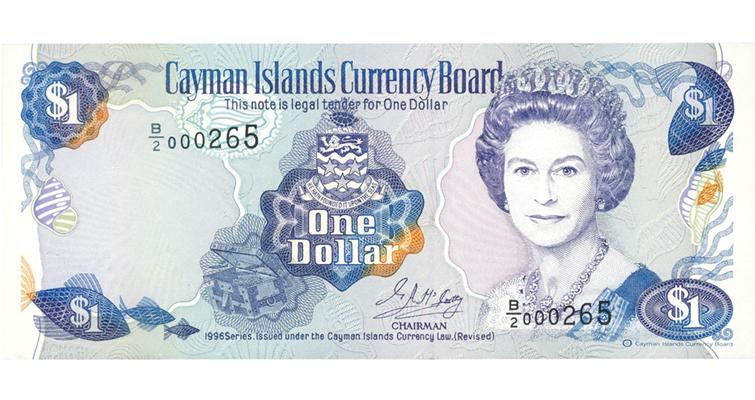 A more mature queen, in a scene from 1977 when she marked her Silver Jubilee, appears on the 1996 $1 note from the Cayman Islands. The Cayman Islands is tied with the Bahamas for issuing the most note designs depicting the queen, 10.

Editor's note: this is the third part of a series by Jeff Starck exploring the parade of paper money featuring Queen Elizabeth II. The feature appears in the September monthly issue of Coin World.

It is not hard to trace the graceful, maturing image of the queen through the vast array of bank notes issued in her honor.

Chao highlighted the 1996 $1 note from the Cayman Islands, which bears a portrait dated to 1977, when the queen was 51 years old.

With a low face value and a scene of a tropical fish and coral on the note’s back, this note is common and affordable.

Another note featuring an image from 1977 was issued by the Isle of Man in 1982.

This £50 note shows the queen as she appeared in her official portrait for the Silver Jubilee.

Gibraltar’s £5 note from 2000 celebrates the new millennium with a portrait of the queen created in 1992. In this image, the queen wears a bejeweled crown in a stoic but almost smiling vignette, full of gravitas and dignity.

The back features scenes from the island. The note is a special millennium issue and is tan, blue, green and red.