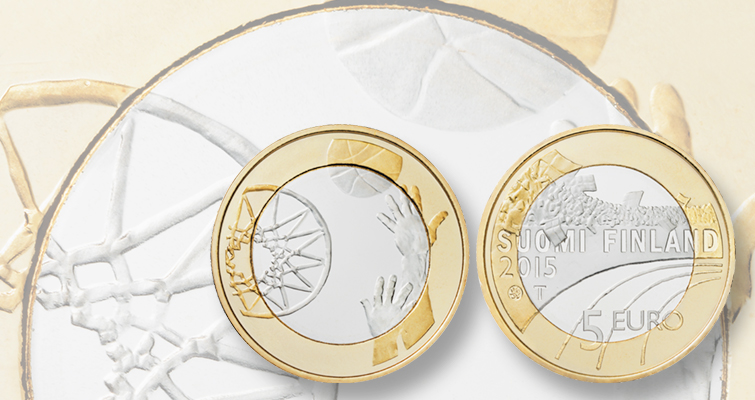 The second noncirculating collector coin in the Mint of Finland’s Sport series of €5 coins celebrates basketball. The coin, part of a nine-coin series, is being released Aug. 24.

The coin is set for release on Aug. 24 and is part of a coin series struck by the Mint of Finland in tribute to the sports loved by Finnish people.

The Sports coin series was launched with a coin for gymnastics, and coins for figure skating and volleyball are also due for release in 2015.

The obverse of the Basketball coin carries a tight view looking up from directly below the net, as two hands clamor for the ball, the intended target within reach.

The common reverse features a track, the nation’s name and the year of issue.

RELATED: Read about the first coin in the Finnish sports series

According to the Mint of Finland, Finnish basketball is currently experiencing a boom, largely due to the performances of the men’s national team, Susijengi (Wolf Team).

The ringed-bimetallic coins have a copper-aluminum-nickel ring and a copper-nickel core.

A maximum of 50,000 Uncirculated examples and 10,000 Proof examples are available.

Ordering opens Aug. 10 through the Mint of Finland's online shop.

Want to learn about more coins from Finland? Check out these Coin World stories!