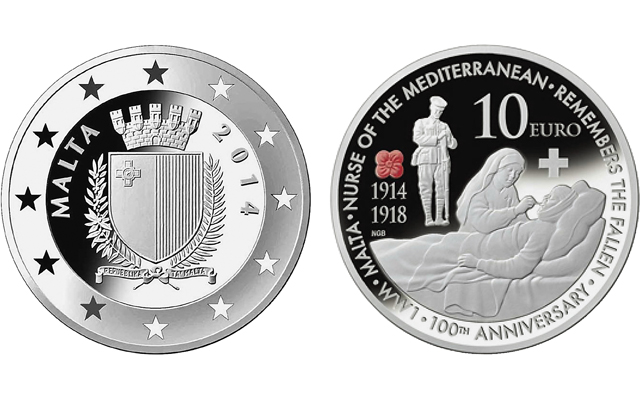 Malta honors the centennial of World War I with a Proof 2014 silver 10-Euro coin highlighting that nation’s role in serving wounded soldiers.

The Central Bank of Malta has issued a Proof 2014 .925 fine silver €10 coin marking the centennial of World War I, as well as Malta’s role as the “Nurse of the Mediterranean.”

The coin also marks the first time that color has been used on a coin from Malta, according to the Central Bank of Malta.

The obverse of the coins shows the coat of arms of Malta with the year of issue, 2014.

The reverse features a nurse administering medication to a wounded soldier, as well as a soldier and a red-colored poppy, a nod to Malta’s 27 hospitals and convalescent camps, where thousands of casualties of the war were treated.

The coins were designed and engraved by Noel Galea Bason, and struck at the Royal Belgian Mint.

The coin weighs 22.85 grams, measures 37 millimeters in diameter and has a mintage limit of 5,000 pieces.