Could there be more treasure at the ‘Ship of Gold’ wreck site? 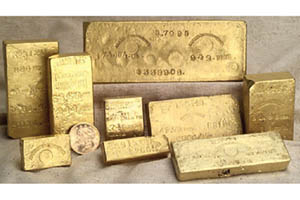 The SS Central America shipwreck site was discovered in 1987 by Columbus-America Discovery Group at a depth of approximately 7,200 feet. The shipwreck was conclusively identified as the Central America a year later and recovery operations began in 1989.

Columbus-America, based in Columbus, Ohio, was led by Tommy Thompson, Bob Evans and Barry Schatz. The firm led the recovery effort in the late 1980s, during which more than 1,000 hours of exploration time was spent on the ocean floor and a large amount of gold was recovered from a small portion of the 1857 shipwreck.

The shipwreck is noteworthy because the steamer ship, operated by the United States Mail Steamship Co., was carrying a large consignment of gold for commercial firms, in the form of both gold ingots and coins, including more than 5,000 Mint State 1857-S Coronet $20 double eagles.

Beyond the financial loss, 477 passengers, mostly either miners or businesspersons with interests in the California Gold Rush, perished.

The recovered coins were marketed by the California Gold Marketing Group LLC.

After a lengthy legal battle, in May 2013, a federal court appointed Kane to supervise recovery operations as the representative of Recovery Limited Partnership, which was established in 1985 to help finance the project, and Columbus Exploration LLC.

Kane’s role as receiver is to maximize the recovery of cargo and cultural heritage items that remain on the Central America shipwreck site for the benefit of the two firms’ investors and their creditors.

Mark Gordon, Odyssey’s president and chief operating officer, said that the firm expects the project to move forward in April, since Odyssey has access to previous records and images that provide a solid overview of the shipwreck.

Gordon said that the recovery mission of the Central America is part of a larger plan to recover existing shipwrecks in cases where legal issues are resolved prior to cargo recovery.

Gordon pointed to the firm’s success with 19th century paddlewheel shipwrecks, such as the recovery of 51,000 coins and 14,000 artifacts from the SS Republic a decade ago. Among the coins recovered from that Civil War-era shipwreck were 2,675 Coronet $20 double eagles and 1,460 Coronet $10 eagles.