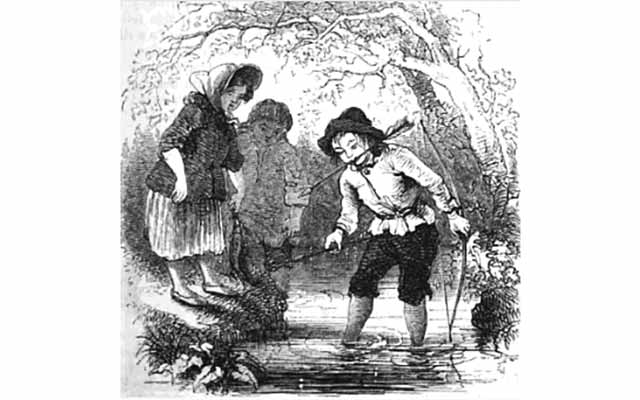 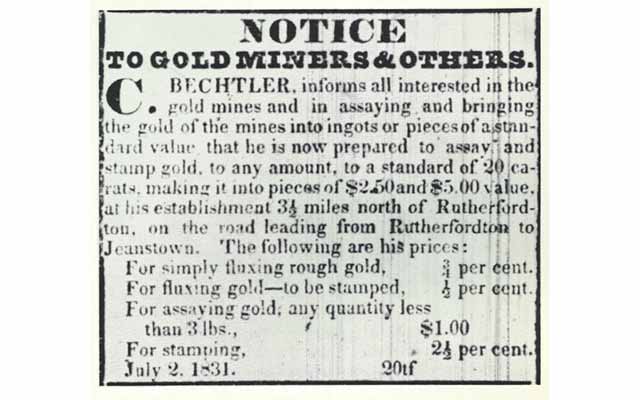 Christopher Bechtler advertised his new mint in this July 2, 1831, advertisement in the North Carolina Spectator and Western Advertisers. Image from The Bechtlers and Their Coinage by Rodney Barfield and Keith Strawn. 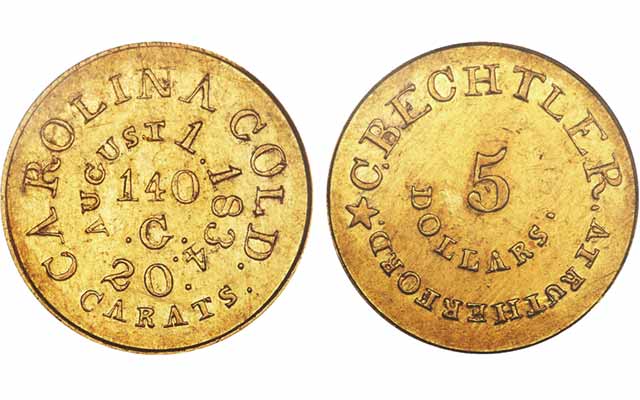 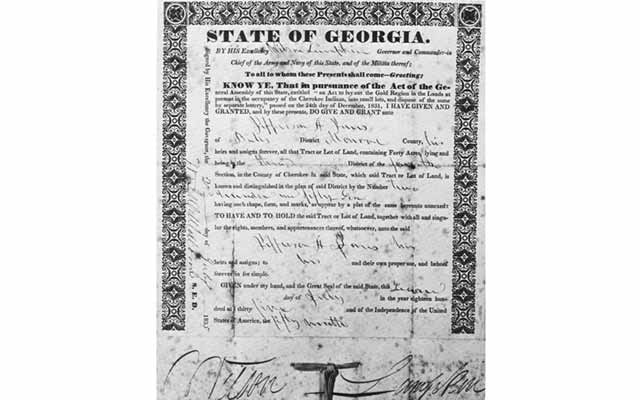 Grant issued to a drawer in the Cherokee Land Lottery of 1832. Image from Wikipedia. 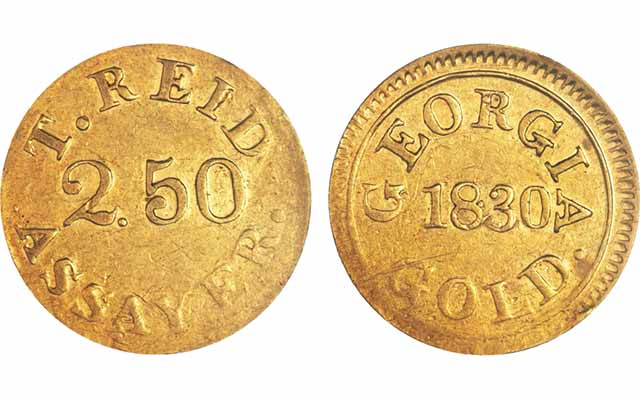 A curious 12-year-old, a sharp-eyed builder and three lucky Swedes touched off three of America’s greatest gold rushes, changing the United States and its coinage forever.

From Georgia to California and north to Alaska, gold strikes generated enormous wealth and led to the establishment of four of the United States’ seven mints, arguably the nation’s first commemorative coin and hundreds of privately minted gold pieces.

America’s first gold rush started, albeit snail slowly, in the spring of 1799 when Conrad Reed, 12, skipped church one Sunday to go bowfishing with his sisters in Little Meadow Creek on his family’s farm in Mecklenburg County, near Charlotte, N.C., in the Appalachian Mountains.

“Conrad saw a yellow substance shining in the water. He went in and picked it up, and found it to be some kind of metal, and carried it home,” George Barnhardt, a Reed relative, recalled in 1848.

What the metal was remained a mystery for three years. Conrad’s father, John, took the 17-pound nugget to a nearby silversmith who could not identify it. The Reeds used the triangular stone as a doorstop until 1802, when John took it to a Fayetteville, N.C., jeweler, who told him it was gold.

When word of the boy’s find spread, neighboring farmers started searching the area’s streams for other placer gold deposits. (Placer gold is gold flakes or nuggets that have weathered out of veins in host rock. It is typically found just lying on the surface or in sand and gravel deposits in streams or beaches.)

For the next two decades, gold mining was a part-time occupation in the area, often done after planting was finished and the streams had dried up for the summer.

In an online report, Gold Fever and the Bechtler Mint, University of North Carolina TV reports: “Southern prospectors who were lucky enough to find gold had no reliable market for it. The only U.S. Mint was in Philadelphia — a long, dangerous journey away. There were few roads and fewer bridges. Travel was uncomfortable and unreliable. Much of the gold found by well-organized companies could be shipped through Charleston to Europe more reliably than it could be sent to Philadelphia.”

Starting about 1825, surface mining of placer deposits gave way to underground mining of gold veins. Gold flowed, men came and more and more mines opened. By 1832, the University of North Carolina reports, more than 50 mines were operating in the state, employing more than 25,000 people.

Farther south in the mountains, gold was discovered in the late 1820s on and near the Cherokee lands of Georgia. According to one story, Benny Parks found the first nugget on his birthday in 1828 while following a deer path near Dahlonega, Ga. In another story, a slave made the fateful find.

Whatever the truth, more than 15,000 miners followed during the next two years, and the Cherokee were banished. In 1832, the state of Georgia held a lottery to distribute confiscated Indian lands to free white men and widows.

As more and more gold was mined, the need developed for a way to convert the gold to ingots and coins. Periodic requests for a federal Mint in the gold fields fell on deaf ears, and private enterprise took up the slack.

Templeton Reid of Milledgeville, Ga., was the first to strike his own coinage, but his enterprise lasted only a few months.

On July 24, 1830, the town’s Georgia Journal reported Reid had set up a private mint that he planned to move to the mines. The newspaper wrote, “He makes with great facility and great neatness, pieces worth ten, five and two and a half dollars. No alloy is mixed with it, and it is so stamped that it cannot be easily imitated.”

Reid moved his mint to Gainesville, Ga., and operated it until mid-October, when he closed it in the face of overwhelming opposition. Critics claimed his coins were lightweight and illegal. One said his $10 pieces contained only $9.58 in gold. Others incorrectly maintained the Constitution prohibited private coinage.

In its Legendary Coins & Currency online exhibit, the Smithsonian Institution reports, “Rumors spread and before long Reid was forced to close up the business. He apparently planned to go to California to participate in the gold rush there, and even made dies with a California imprint. However there is no record of his having made the trip West.”

Researcher Dr. Dexter C. Seymour determined in the 1970s that Reid struck only 1,500 to 1,600 coins, and that all but about 40 had been melted over the decades, making them among the rarest of pioneer gold pieces. Reid gold pieces often top $200,000 when they appear at auction.

About 150 miles northeast of Reid’s aborted mint, jeweler Christopher Bechtler Sr. opened his own private mint in Rutherfordton, N.C., at the request of the local miners and with the public’s support.

The town’s newspaper, the North Carolina Spectator, reported July 2, 1831, “Mr. B. has undertaken this enterprise at the suggestion of several gentleman [sic] of the highest standing among our miners for the purpose of putting into use the actual resources of this region as a circulating medium in the transaction of business.”

The private mint struck an estimated $2.25 million in gold $1, $2.50 and $5 pieces, most of which were eventually melted and recoined at federal mints. However, enough are extant that lower grade or scratched coins can sometimes be had for $1,000 to $2,000.

The Bechtler Mint remained in operation into the 1850s — more than a dozen years after the federal government opened a Branch Mint 75 miles away at Charlotte, N.C.

In 1835, Congress, led by hard money advocates who wanted to crimp the circulation of state-authorized paper money, approved the Branch Mint Act, authorizing the construction of mints at Charlotte, N.C.; Dahlonega, Ga.; and New Orleans.

The Appalachian mints were created to coin gold; the New Orleans Mint was designed to recoin foreign silver coins then in circulation, especially Spanish colonial and Mexican coins.

The Charlotte Mint began operation between March 28 and 31, 1838, with the striking of 678 half eagles. The Dahlonega Mint came on line two weeks later with the April 17, 1838, striking of half eagles.

The Appalachian mints remained in operation until they were taken over by state and Confederate forces in 1861. By the end of the Civil War, area gold production had fallen to the point that the federal government saw no point in reactivating the mints.

Today Charlotte and Dahlonega Mint coins are prized by collectors for their rarity and romance, especially the 1861-D Indian Head gold dollar, which was produced in April 1861, after the Confederacy captured the Dahlonega Mint. In 2013, Heritage Auctions sold a PCGS MS-63 example, with a green sticker from Certified Acceptance Corp., for $111,652.