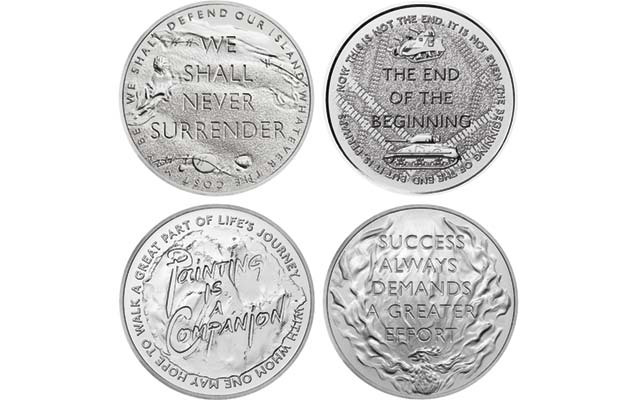 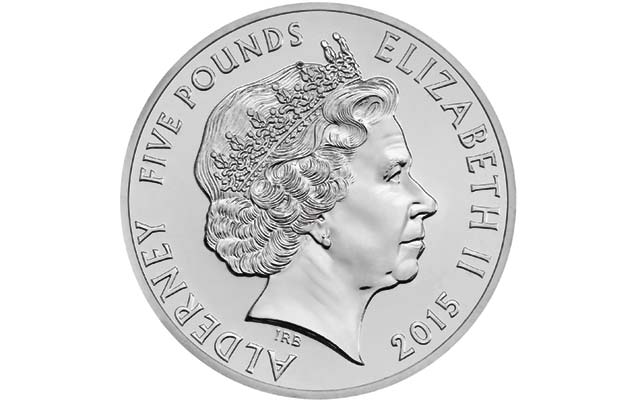 Each of the Alderney £5 coins in the set features a special design on the reverse, paired with this obverse featuring the Ian Rank-Broadley effigy of Queen Elizabeth II.

The Royal Mint has issued four coins for Alderney capturing some of the best-known quotes of statesman and renowned orator Sir Winston Churchill.

Each £5 coin was designed by Royal Mint senior engraver Lee R. Jones, and highlights a different aspect of the great man’s persona in his own words.

The coins are currently offered as part of four-coin sets, with each coin represented in both a Brilliant Uncirculated copper-nickel set and a Proof .925 fine silver set. Two of the coins in the Proof set are embellished, one featuring trichromatic color and the other having gold plating.

The War Leader coin carries the quotation “We shall defend our island, whatever the cost may be, ... we shall never surrender,” taken from Churchill’s speech to the House of Commons given on June 4, 1940, during the Battle of France.

Set against a sandy beach scattered naturally with seashells and small stones, the quote excerpt is framed, almost delicately, with the unnatural intrusion of the island's barbed wire defenses.

The Orator coin focuses on a speech Churchill made while rallying troops for the Battle of El Alamein.

The quote on the reverse is: “Now this is not the end. It is not even the beginning of the end. But it is, perhaps, the end of the beginning.”

The Battle of El Alamein is considered one of the most decisive battles of the World War II. It was fiercely fought by both sides, close to the Egyptian coastline, testing the spirits of the men on the ground, and of their leaders.

The design of the coin portrays the tread tracks of tank warfare, suggesting the harsh conditions of many battles of World War II and the weaponry in use.

The third coin in the set, "Artist," celebrates Churchill as artist, with the quote: “Painting is a companion with whom one may hope to walk a great part of life’s journey.”

This quote appears in an essay written by Churchill titled "Painting as a Pastime" featured in Strand magazine in 1921.

Churchill began to paint when he was in his 40s. He entered and won painting competitions under assumed names. In 1948 he was made Honorary Academician Extraordinary by the Royal Academy for achievements in the art of painting.

This coin design takes the form of an artist’s paint palette, with the lettering of the quotation seemingly drawn in the paint.

Trichromatic printing colorizes the "paint" portion on the Proof silver edition of this coin, reflecting Churchill’s love of color.

The final coin in the set celebrates “The Man.”

These words were spoken to Robert Menzies, Prime Minister of Australia in 1940. From Churchill's command of his country’s troops, and his time as a war correspondent during the Boer War, to his re-election in 1951 after the disappointing defeat of 1945, this coin design captures the perfect analogy for Winston Churchill — the phoenix rising from the ashes, suggestive of his courage and self-belief.

Jones took inspiration for the flames from Auguste Rodin’s Gates of Hell monument for this design. Gold plating appears on the reverse of the Proof silver version of this coin, highlighting the dramatic flame design.

Jones has produced many evocative coin designs, including the reverse design that features on the 70th Anniversary of D-Day £5 coin, capturing the courage and sacrifice made by "rank and file" troops.

For this four-coin set, Jones chose to convey a sense of the great leader’s character.

He said,“It was a challenge to take the words of Churchill and represent them on the relatively small canvas of a coin. Fortunately, his words were so powerful and pure in vision that I was able to select the heart of his message, presenting them against evocative images. Each coin represents a facet of the complex yet formidable character that led a nation through the Second World War.”

Each reverse design is paired with the Ian-Rank Broadley effigy of Queen Elizabeth II on the obverse.

Each coin weighs 28.28 grams and measures 38.61 millimeters in diameter.

The BU coins are limited to a maximum mintage of 2,500 coins each. From that mintage, 2,000 four-coin sets are available, priced at £50 per set. The Royal Mint has not disclosed its plans for the balance of the BU coins.

The Proof versions are limited to a mintage of 1,000 coins each. From that mintage, 800 four-coin sets are available for £350 each. The Royal Mint has not disclosed its plans for the balance of the Proof coins either.

Sales began May 6, with delivery expected beginning in June.

To learn more about the coins, or to order them, visit the Royal Mint website.