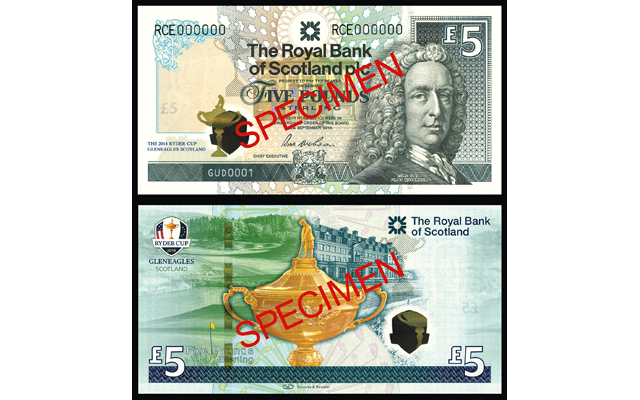 The Royal Bank of Scotland has unveiled the world’s first bank note celebrating the Ryder Cup golf contest. The 5-pound note is available for pre-order now for 20 pounds per note in special packaging. Though available to ticket holders at face value at the event, the note is not intended for general circulation.

Images courtesy of the Royal Bank of Scotland.

The Royal Bank of Scotland has unveiled a collectible £5 bank note commemorating the Ryder Cup golf contest, the first note in the world to mark the event.

The note, which is not intended to circulate but will be mostly sold at a premium above face value, is a joint product between Ryder Cup Europe and Royal Bank of Scotland. The note was unveiled June 16.

The 40th Ryder Cup Matches will be held from Sept. 26 to 28, 2014, on the PGA Centenary Course of the Gleneagles Hotel near Auchterarder in Perthshire, Scotland.

The special edition £5 note will be available in official Ryder Cup commemorative display packaging. There is a space within the folio package for collectors or visitors to display a Ryder Cup ticket.

The note is being sold for £20 through the Ryder Cup store.

The commemorative bank note can be spent at face value anywhere in the United Kingdom but is unlikely to be found in circulation.

Examples of the note will be made available at face value for Ryder Cup match day and practice day ticket holders during an exclusive one-for-one exchange at the Gleneagles course during the week of the event itself. Notes exchanged in this arrangement will not include the commemorative packaging.

The bank note will be printed on Hybrid paper – a first for the United Kingdom and Europe. The mix of traditional cotton paper and polyester plastic materials will make the note more durable and resistant to tears or staining.

The design includes a see-through window in the shape of the Ryder Cup, and this window feature on Hybrid bank note paper is also a European first. Other security features have not been disclosed.

The Ryder Cup bank note will be the first ever to contain the signature of RBS Chief Executive Ross McEwan.

The production limit is unknown at this time, according to officials.

The bank note was designed and developed by Royal Bank of Scotland as part of the bank’s ongoing commitment to Scottish golf. The first notes are already being printed by German printer Giesecke & Devrient, and the official commemorative packages are ready for pre-order.

For more information about the note, visit the Ryder Cup store website.