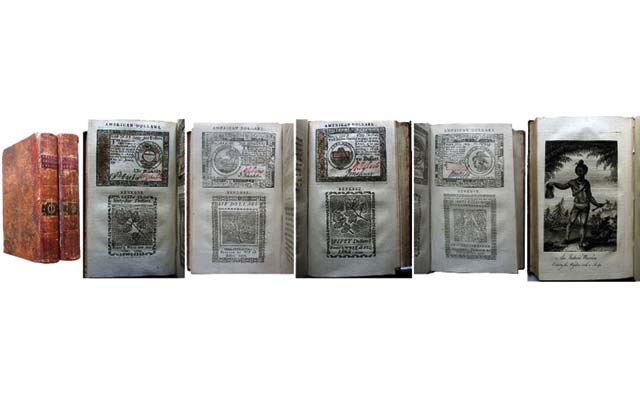 Travels Through America by Thomas Anbury, a lieutenant in the British army, was published in London in 1789. It includes woodcuts of early American notes.

An unusual collection of paper money, in that it stops with notes printed in 1815, is set for auction in Stuttgart, Germany, on June 3. It is called the “AG Collection: Paper Money from the Beginning to 1815,” comprising 480 lots with 560 individual items from around the world.

The sale is being conducted jointly by Münzen & Medaillen GMBH of that city and Sincona AG of Zürich.

The oldest offering is not actually currency, but an Egyptian papyrus fragment from the Ptolemaic period dating to the second century B.C. It is included in the sale because the catalog points out that monetary transactions “form a major portion of all papyri finds.” The first collectible issue of paper money, a Ming Dynasty Imperial Treasury Note of 1 kuan (1,000 cash) dating to 1375 and called “nearly uncirculated” comes with an estimate of €5,000 ($5,615 in U.S. funds).

Notes in the auction are from 21 countries. Present day Germany is represented by Hamburg, Mayence, Prussia, Schleswig-Holstein, Saxony, and Westphalia; Italy by Sardinia, Naples and the Vatican. As would be expected, the auction offers a large selection of French assignats, as well as more than a hundred Billets de Confiance, which are considered the first nationwide emergency money in history, local issues printed mostly in 1791 and 1792 to make small local transactions possible.

The auction offers more than 20 Japanese provincial issues, most of which preceded the first European paper money.

American currency is well-represented with examples from 12 of the 13 Colonies and a few private issues.