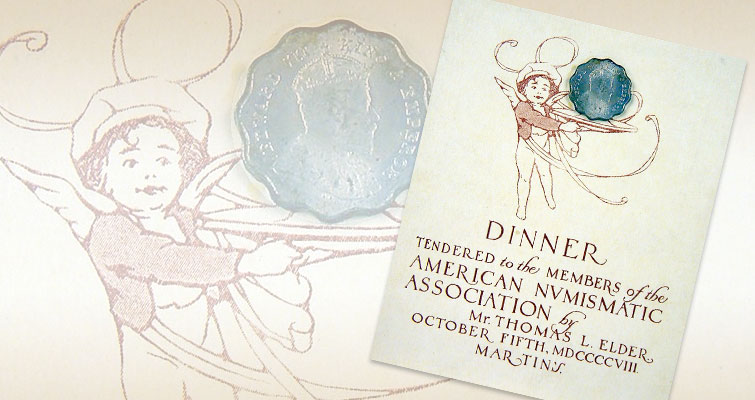 A 1908 invitation to a private dinner hosted by Thomas L. Elder in New York City featuring a 1-anna piece from British India sold for $440.63.

The collecting area of numismatic literature is a wonderful complement to a collection of regular issue coins, and it’s an area where one gets a sense of the history of objects along with the history of coin collecting. Kolbe and Fanning Numismatic Booksellers’s Aug. 22 auction featured selections from the libraries of former Coin World editor Margo Russell and collector Raymond Hale. Those curious to learn more about this fascinating collecting area would bewell-advised to look into joining the Numismatic Bibliomania Society, online at www.coinbooks.org.

The Story
The cover lot of the Kolbe and Fanning auction was a charming invitation by New York dealer Thomas L. Elder for attendees of the 1908 American Numismatic Association convention.

The convention was held in Philadelphia, but Elder’s dinner was sponsored in part to attract ANA attendees to his auction, which was held Oct. 5, 1908 — which just happened to be the same day as the dinner.

The cream-colored folded card included a mounted 1-anna piece from British India and, while the date is not visible, the type, featuring a portrait of Edward VII, started in 1906, providing a narrow range of possible dates.

On the dinner, the catalog added, “Held at fashionable Cafe Martin, Mint collection curator T. Louis Comparette gave a little talk on ‘The Progress and Aims of Numismatics in America.’?”