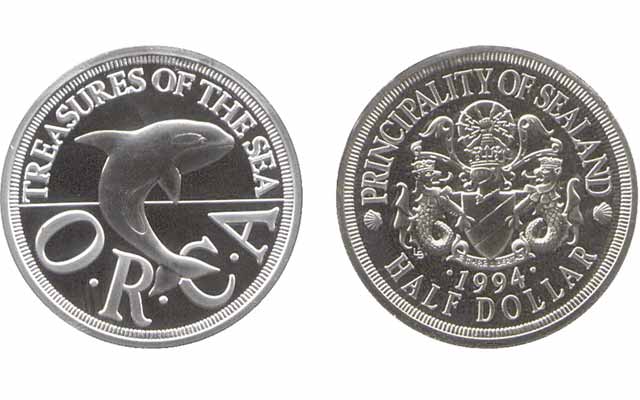 You may never have heard of Sealand, but there are coins from this place off the coast of the United Kingdom for collectors.

Editor's note: this is the first part of a series by Jeff Starck exploring "coins" of unrecognized states. The feature appears in the August monthly issue of Coin World.

Most people would be hard-pressed to find Kurdistan or Bermania on a map. Rand McNally doesn’t show them. Internet maps from Google and Bing don’t, either. Perhaps even the winner of the National Geographic Bee would be stumped on these two.

That’s because these “nations” and similar places, which have issued what their alleged rulers call coins and paper money, and tokens, don’t exist or remain unrecognized by most major or even minor powers.

As many hobbyists have found, collecting numismatic items from unrecognized states provides a unique but rewarding challenge, an education in geography and history, and close interaction with people having a rebellious or libertarian streak.

With names like the Empire of Atlantium, the Kingdom of Bermania, the Hutt River Province, and the Principality of Sealand, the list of unrecognized states reads like it came straight from a Three Stooges short.

“Or the Marx Brothers,” said Joel Anderson, of Joel Anderson Interesting World Coins, referring to 1933’s Duck Soup, which has Groucho as the leader of Freedonia.

The names and the supposed coins are as different as their creators.

Several types of unrecognized states exist, according to the Unrecognized States Numismatic Society, a group dedicated to collecting numismatic items from such places. It was founded by Oded Paz in 2003.

“I collect at least one coin from every country/ruler, and I stumbled upon some ‘countries’ that were not recognized, but were very interesting to me,” Paz said. “I started researching them — who made them, why, what was their purpose, and the more I dug in, the more I found these coins to be intriguing and definitely worth collecting.”

Paz creates research files for each of these countries, he said, “since many times the story behind the coins is as fascinating, if not more interesting than the coins themselves. Shortly after I started seeking these coins, I found some other collectors that had the same interest, and in June 2003 I formed the USNS.”

RELATED: Where is Purple Shaftieuland, and what coins have they issued?

The list includes “unrecognized entities that are known or reputed to have minted coins or printed bank notes.”

To collect these items, throw away the conventional meaning of a few words. “Coins” generally must have been issued by a government authority, and most of these “places” (for the lack of a better term) are not recognized as having any authority. In this article, the terms “coin,” no matter what the issuers claim, are a reference to a fantasy issue by a fantasy nation, and not something recognized as legal tender.

The true status or definition of just what these places are could be debated. Many unrecognized states have produced passports, stamps and paper currency, and conferred titles and awards, all of which most outsiders ignore.

Many unrecognized states, for example, in the category “fantasies of private creation,” have no physical base. Such states include Bermania and Purple Shaftiueland. In contrast, some places, such as Hutt River Province, have a physical location in another nation and have claimed sovereignty, which has been ignored by the larger entity.

Other places, like Sealand, claim an actual physical base in an area found to be outside any national jurisdiction.

The most prevalent are what the USNS categorizes as “micro nations.” These places are often small, geographically and in population, with few active participants. Desire to have sovereignty recognized separates micro nations from the entities in the other categories.

Here’s a look at several different unrecognized states that have produced purported coinage collectors can pursue.