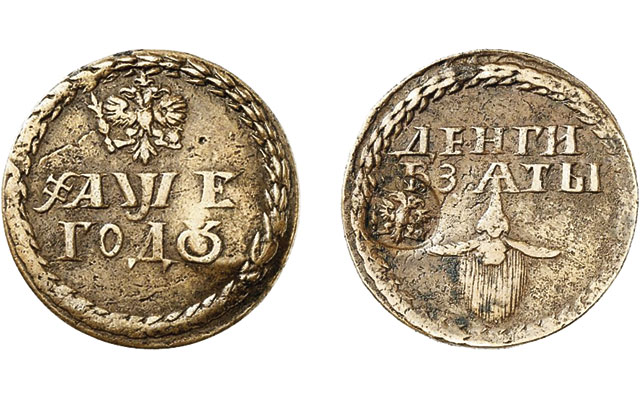 A circa 1705 Russian beard token was issued as a result of a ukase, or ruling, from Peter (the Great), which outlawed the wearing of facial hair. The token was proof that the wearer had paid a tax to continue wearing facial hair. 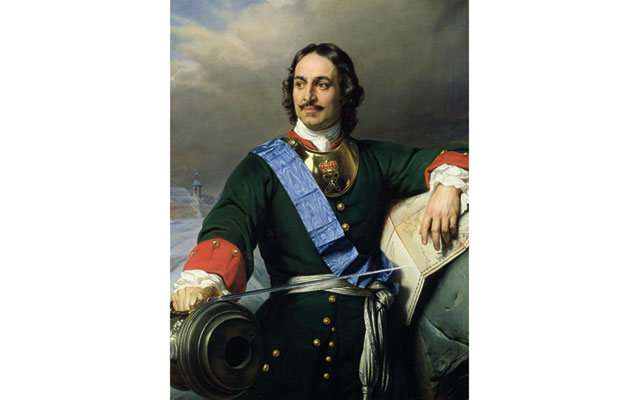 Though Peter the Great intended to reform the way his people looked by outlawing facial hair, this painting clearly shows that he sported a moustache.

With the 2016 U.S. Presidential campaign gathering steam by the day, it’s a safe bet that taxes will be a common topic, regardless of the politician.

Of all the taxes that will be referenced in political speech in the United States, none may be as broad-reaching as one in 18th century Russia. The beard tax of Peter the Great led to a series of fascinating tokens, one of which is offered in Fritz Rudolph Künker’s March 10 auction of Russian coins.

Peter the Great instituted numerous reforms, building St. Petersburg and positioning his nation for success in the 18th century.

One of his reforms, however, was directed at the way citizens presented themselves. In 1698, Peter decreed that Russians should dress more like other Europeans, and outlawed beards and other facial hair.

The ukase (or edict) was followed by another in 1705 that authorized the issuance of beard tokens, to be purchased by those who continued to wear facial hair. These served as receipts for the tax, allowing them to continue to sport facial hair.

Peasants and clerics were exempt, but everyone else who wanted to wear a beard had to pay the annual fee and carry a token as proof of payment.

The first pieces were round affairs showing a nose, mustache and beard on one side and the imperial eagle on the reverse. Later issues were diamond shaped and dropped the images but bore the legend, “The beard is an unnecessary burden.”

Zander wrote, “The czar’s frontal attack on the customs of his people produced a violent and indignant reaction.”

Subsequent rulers continued Peter’s policy toward men’s facial hair, until Catherine II (the Great) took the throne in 1762 following the death of her husband, Peter III.

Walter Hawkins, writing in “Russian Beard Tokens” in the 1843–1844 Numismatic Chronicle, suggests that the tokens are rare (with the exception of novodels or restrikes in the 19th century) because of the public’s distaste for the tax.

“The national aversion to the origin of this token probably caused their destruction or dispersion, after they had served their purpose for the years as they are now very rarely to be met with, even in Russia,” he wrote.