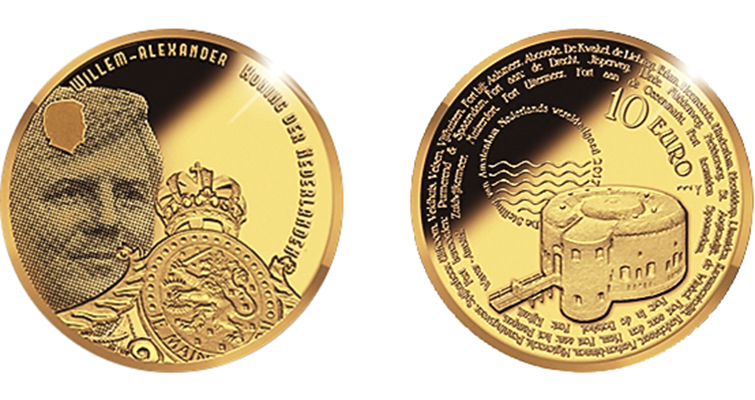 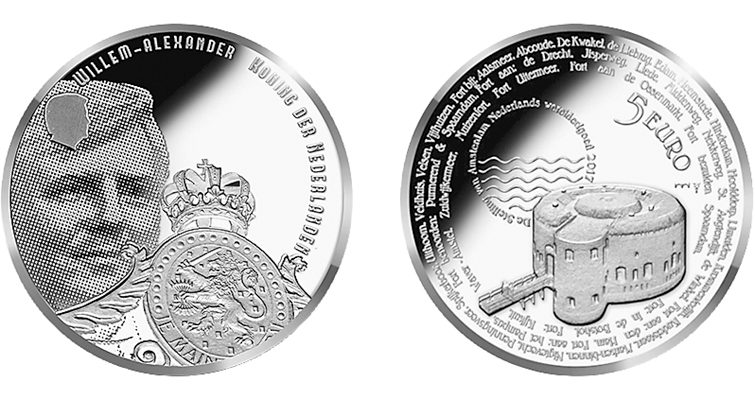 The Royal Dutch Mint, commissioned by the Ministry of Finance, has issued another group of coins in the series honoring Dutch UNESCO sites, the design for this group depicting the historical Defense Line of Amsterdam.

These final Dutch coins of 2017 are also the first commemoratives with the St. Servais Bridge as the mintmaster’s privy mark of Stephan Satijn.

The Defense Line of Amsterdam is an 84-mile-long line built around Amsterdam by the Dutch government between 1883 and 1920. In the event of an attack, the army, government, and king could withdraw within this perimeter, consisting of 42 forts and a large number of batteries, dikes, and locks.

The protective border is an impressive hydraulic engineering system; according to UNESCO, it’s the only example of a fortification based on controlling water. The forts were designed to act in conjunction with temporary flooding from polders and a complex system of canals and locks. Amsterdam would be difficult for an invader to reach because the land would be under water.

The forts still exist and have functioned variously over the years — for storage, as homes, or even prisons. The Defense Line of Amsterdam is on the list of Dutch World Heritage Sites.

The “wall of water” coin features the Fort on the Ossenmarkt, chosen because of its complementary round shape in relation to the coin. Other forts in the defense line are mentioned along the coin’s outer rim. The circle with the names represents the line itself. The obverse features King Willem-Alexander.

The silver €5 coin weighs 15.5 grams, measures 33 millimeters in diameter and has a mintage limit of 5,500 pieces.

The silver-plated copper €5 coins weigh 10.5 grams and measure 29 millimeters in diameter. The coin is mounted in a descriptive card and has a mintage limit of 15,000 pieces.

The distributor Coin & Currency Institute offers the coins to collectors in the United States. The gold coin retails for $575 and the silver coin costs $73.75. The silver-plated copper coin is priced at $22.50. Shipping costs $5.75 per order.