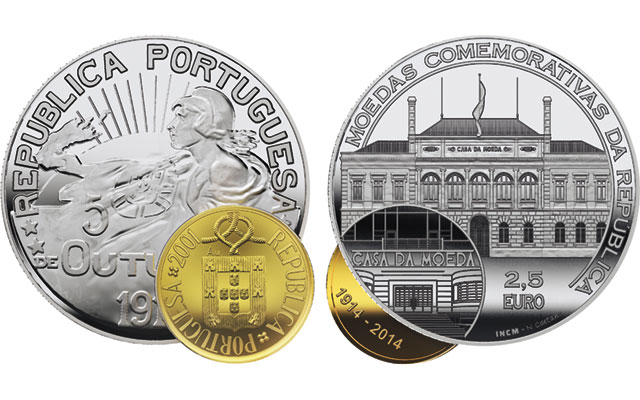 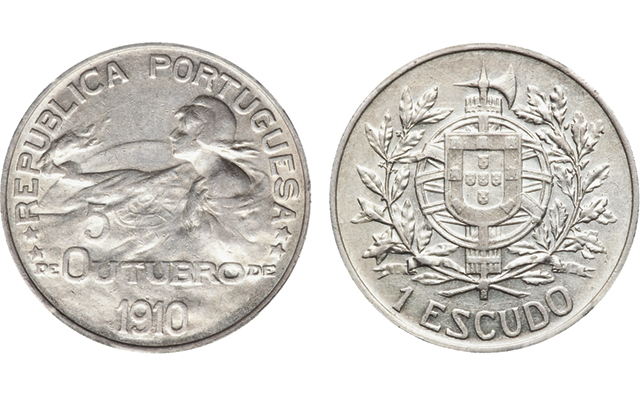 In 1914, four years after a revolution created the First Portuguese Republic, the nation issued the first Portuguese commemorative coin, dated 1910. The silver 1-escudo piece shows an allegorical figure and the country’s shield. 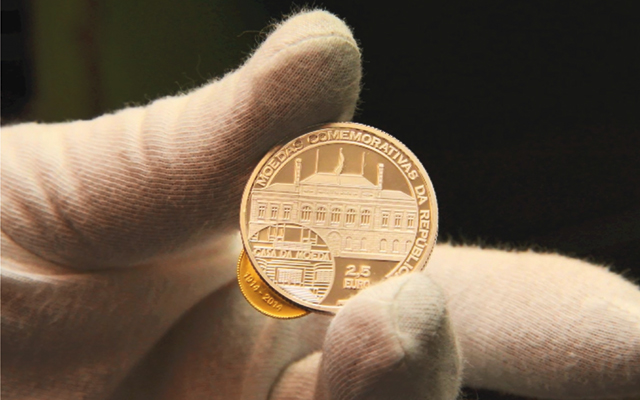 A Portuguese State Mint worker displays the reverse of a Proof 2014 silver-and-gold €2.5 coin moments after it was struck.

Editor's note: The following is the first of a two-part Coin World series about the blending of history and technology in a new collector coin from Portugal, prepared by Jeff Starck for the November 2014 monthly edition of Coin World.

Mints take great pains when striking coins to avoid making errors, but at first glance, the Portuguese State Mint’s newest silver €2.5 coin, with a disc of gold hanging off the coin, might look like a misstrike.

The coin is not an error; rather, a portion was struck off-center on purpose.

Creating the coin’s distinctive appearance is the latest salvo in the battle to develop new technology for modern commemorative coins. While the technology for making these coins is not quite as earthshaking as, say, a drone strike, the efforts of the Portuguese State Mint (Imprensa Nacional-Casa da Moeda) are making noise in the marketplace.

Collectors have seen map-shaped coins, coins with jewels and precious metals embedded, coins struck with space-age metals, and even coins with centers made from a different metal or element. But collectors have never seen anything quite like this, as the relatively small Portuguese State Mint appears to be joining the vanguard of commemorative coin technology, competing against larger national mints like the Royal Canadian Mint and Britain’s Royal Mint, which have publicly poured millions into research and development.

Portugal’s mint calls it the world’s first “eccentric” coin, based on the technical meaning of eccentric, referring to something not placed centrally or not having its axis placed centrally. While the point could be debated that many coins, with their gems or technological gizmos embedded, could qualify, the new commemorative coin certainly is in a class by itself, with a gold disc intentionally jutting off a larger silver canvas, resulting in a noncircular coin.

A key distinction might be that the overall product is one coin, not a design created from two or more individually denominated coins, a recently popular motif.

Why was the coin made?

The Proof 2014 coin celebrates the 100th anniversary of the Republic of Portugal’s first commemorative coin.

Oct. 5 is celebrated as Revolution Day in Portugal, to mark the beginning of the First Portuguese Republic, which was established in 1910 after King Manuel II of the Braganza dynasty was overthrown.

The 2014 coin was designed by Nuno Caetano.

António Salgueiro Verdasca, head of the commemorative coin unit at the Portuguese State Mint, told Coin World, “There are lots of bimetallic coins shapes around the world with all kinds of inserts, but in this case the smaller disk goes beyond the edge of the bigger one and this is part of the novelty of this coin.”

The coin was sold out before its Oct. 1 release, with the entire 2,500-coin mintage purchased during distributor and domestic sales that began sometime in mid- to late September.

The coin had an official issue price of €172.20 (about $217.49 in U.S. funds), which is not much more than the retail price for one gold coin and one silver coin matching the specifications of the components in this “eccentric” coin.

Collectors who obtain one might just find it priceless, thanks to the unique, secret minting process developed for the coin.