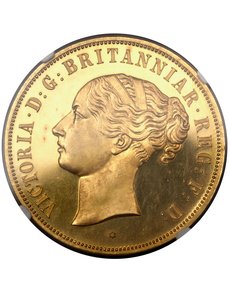 Rare gold from around the world led the way as the Heritage Ancient & World Coin Signature Auction realized over $11.8 million overall January 6-7 in New York. All prices include a 17.5% Buyer's Premium.

Taking top honors in this auction was a pattern gold Crown struck for Queen Victoria, graded Proof 64 Ultra Cameo, which sold for $235,000. This ultra-rare, undated piece was struck in 1887 in Nuremberg, Germany. The obverse was patterned after the famous William Wyon young head portrait of Victoria, while the reverse devices include the Order of the Garter crest supported by a crowned lion and a unicorn in chains. The designer of this piece is unverified, as the artist did not sign the dies for this piece.

Gold ingots from Brazil are extremely rare in private hands, and those with the original certificate, the Guia doubly so. ABrazilian ingot of Serro Frio, 1832, one of only 6-8 surviving ingots with Guia, sold for $188,000 in New York. This piece boasts a pedigree going back over 100 years and was likely one of the last such ingots struck, as research done by prominent Brazilian numismatist Kurt Prober lists a single 1833 example. The vast majority of Brazilian ingots reside in museums and institutions. Another Brazilian ingot, this one from Goias 1821, sold for $99,875.

A gold rarity from Bohemia, the 1629-HG Ferdinand III 12 Ducats from the Glatz mint, brought an outstanding price of $129,250. This magnificent double-taler sized rarity, graded MS52, is so rare that Heritage catalogers were unable to find a record of a similar piece previously selling at auction.

Heritage’s January numismatic auctions continue through January 16. Overall, these auctions are expected to exceed $70 million in sales, getting the new year off to a fast start.