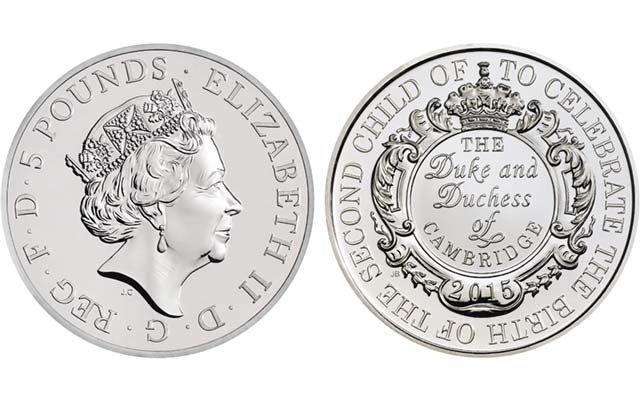 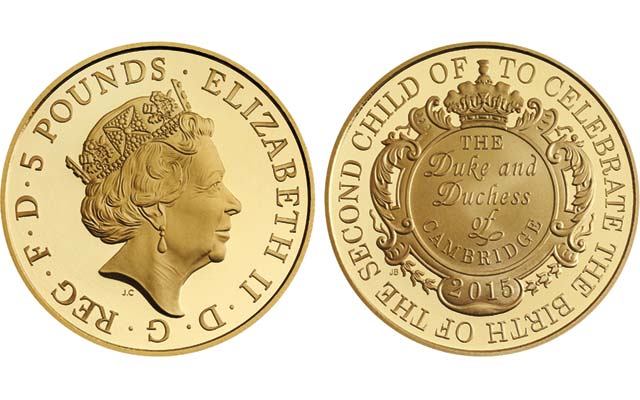 A Proof .9167 fine gold version of the £5 coin for the birth of Princess Charlotte Elizabeth Diana has a mintage limit of 500 pieces, and retails for £1,800.

Hours after the May 2 birth of Princess Charlotte Elizabeth Diana, the second child born to the Duke and Duchess of Cambridge, the Royal Mint began offering 2015 commemorative £5 coins marking the birth.

The special £5 coins have the Royal seal of approval from Queen Elizabeth II and the child’s parents, as well as George Osborne, Chancellor of the Exchequer and master of the Royal Mint.

Artist John Bergdahl, who also designed the coins issued for the christening of Prince George in 2013, designed the new coins.

The obverse of the coins bears the new fifth (newest) portrait of Queen Elizabeth II, by Jody Clark.

Bergdahl’s design echoes his design for the christening of Prince George, issued in 2013. Traditional in nature, the 2015 design bears a block cartouche topped with a coronet and features lilies, just as the coin for Prince George was adorned with details inspired by the Lily Font, a fountain used in the baptism of royal children.

Three versions of the Royal Baby coin are available. Each measures 38.61 millimeters in diameter.

A Brilliant Uncirculated copper-nickel version weighs 28.28 grams and has an unlimited mintage. It retails for £13 and is presented in a printed card.

The Proof .9167 fine gold version weighs 39.94 grams and has a mintage limit of 500 pieces, with 400 pieces available individually (intentions for the balance have not been revealed). It retails for £1,800.

This is only the second time that a Royal Mint United Kingdom coin has celebrated the birth of a member of the Royal family with their official approval. The first — a silver £5 coin issued to mark the birth of Prince George on July 22, 2013 — sold out its mintage of 10,000 coins within days.

To order the 2015 coin, visit the Royal Mint website.