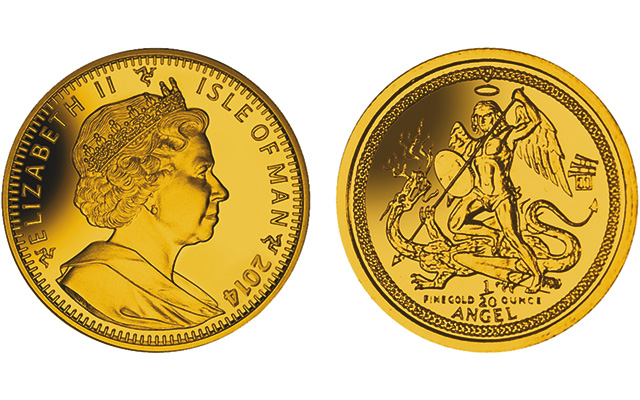 A 2014 Angel 20th-ounce gold coin from the Isle of Man includes a privy mark on the reverse that reflects the “11 pipers piping” refrain from the popular song “The Twelve Days of Christmas.”

The Pobjoy Mint continues a series of privy marked Angel gold coins for the Isle of Man to celebrate “The Twelve Days of Christmas” — the 2014 edition’s mark represents “11 pipers piping.”

The privy mark, a tiny addition to the coin design distinguishing the coin from the standard version, appears on the reverse. The mark is to the right of the design of Archangel Michael slaying the dragon, from the 1984 Angel gold coin.

Three reverse designs have appeared on the Angel since the Isle of Man began the program in 1984, and in honor of the 30th anniversary, the first design is again used for this coin.

The Proof 2014 20th-ounce .9999 fine gold coin has been approved by Buckingham Palace and bears an effigy of Queen Elizabeth II by Ian Rank-Broadley on the obverse. The coin is legal tender in the Isle of Man.

The coin is the penultimate in a 12-year series honoring the different verses of the popular song with representative privy marks.