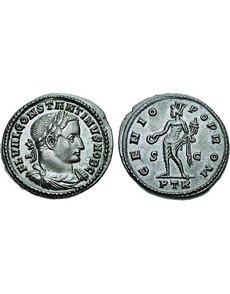 The ultimate successor of Diocletian’s political system was Constantine I “the Great,” for whom this billon nummus was struck at Trier, Germany, in A.D. 307. 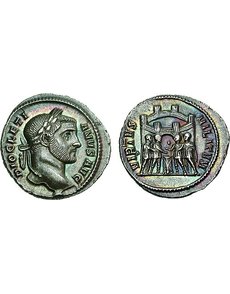 Silver argenteus of Diocletian shows on its reverse the four members of the tetrarchy before a gate of a walled city or a fortress. 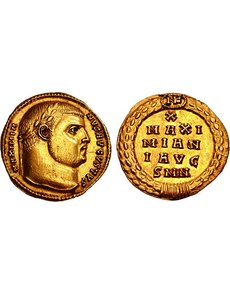 Galerius, who became the most powerful figure in the empire after Diocletian’s abdication in A.D. 305, is portrayed on this gold aureus of Nicomedia. 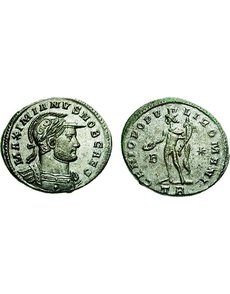 The emperor Maximian is shown wearing a helmet and a military cuirass on this billon nummus struck at the mint of Trier, Germany.

In November A.D. 284, a dispirited Roman army was marching westward after a campaign against the Persians.

En route, the emperor Numerian was found dead in his litter; the army executed his murderer and chose one of their commanders, Diocles — better known as Diocletian — as their new emperor.

Diocletian was one of Rome’s most important emperors, and his reign marked a transformation in Roman society. His first innovation was to appoint a colleague, Maximian, as co-ruler. This was a practical measure since the empire was too vast and troubled to rule alone, and Diocletian had no son with whom he could share the throne.

Initially, Maximian held the subordinate rank of caesar but was soon hailed augustus, and he was equal to Diocletian in all respects except that he could not legislate. The two emperors worked together tirelessly to defend the empire, with Diocletian based in the East and Maximian in the West.

In A.D. 293 Diocletian expanded his system to include two caesars: Galerius as his assistant and Constantius I to help Maximian. For the first time in history the Roman Empire was ruled by four men, an innovation that gave rise to “Tetrarchy” as a moniker for the period.

Four rulers made it possible to respond to crises in all parts of the empire, but it also meant a greatly enlarged bureaucracy, which was top-heavy and expensive. By now life had become draconian, oppressive and a mere exercise in survival. This grim reality caused people to focus increasingly on the afterlife and gave momentum to the rise of Christianity.

During the Tetrarchy (circa A.D. 284 to 313) coins were struck in the names of 15 people. The billon coins of most issuers are readily available, which means there is plenty to collect and a meaningful collection can be built on a modest budget. Though the coins are neatly struck, their simplistic artistry is not to everyone’s taste; they might even be considered an acquired taste.

The earliest coinage system of Diocletian was no different than that of his immediate predecessors. However, in 293 or 294 Diocletian reformed the coinage as part of his larger effort to regulate wages and the prices of goods and services.

The empire’s most valuable standard issue coin — the gold aureus — continued to be struck, though it was stabilized at the weight of 60 to the Roman pound. However, the rest of the system was gutted, and existing denominations were replaced with new ones.

The most important new denomination was the nummus (follis), a large billon coin that contained about 5 percent silver. Since much of that silver was concentrated on the surface, the nummus appeared more valuable than it was. Sometimes the mirror-like, silvery surfaces remain intact — even after their discovery and conservation more than 1,700 years later. Another of Diocletian’s new coins was a dime-sized silver piece, today called an argenteus, which was struck at 96 to the pound. The coin was a failure from the outset because it was too good for the times. It was of such high purity that it was exported or hoarded while the overvalued nummus lingered in circulation.

Several base metal coins were also introduced: a “radiate” and a “laureate.” The radiate is so-called because the issuer is portrayed wearing a radiate crown, and the laureate because he wears a laurel-leaf crown. The former is relatively scarce, and the latter is rare, which suggests they played only a minor role in the system.

Diocletian’s reforms were generally unsuccessful, especially those associated with economics. His attempt to regulate the economy failed miserably, and in fact made matters worse. After his attempt to set maximum prices on goods and services, inflation skyrocketed and economic activity was forced underground, where it bypassed taxation.

His attempt to restrict personal freedoms and to increase revenues also tended to create the opposite effect. For example, he tried to force the increasingly powerful Christian population to make sacrifices to the pagan gods, but to no avail. By the end of his reign, Diocletian recognized that his heavy-handed tactics had failed.

With these depressing reversals, a serious health crisis and (apparently) the ambitions of one of his presumed successors, the Caesar Galerius, Diocletian chose to abdicate in A.D. 305. This had never happened before in the Roman Empire, as the reigns of all previous emperors had ended only with their deaths, natural or violent.

With the joint retirement of Diocletian and Maximian, the two caesars (Galerius and Constantius I) moved up to become emperors in their place. Even though Galerius was technically the subordinate partner, he assumed the dominant role. One of his first acts was to appoint two new caesars — a loyal comrade, Severus II, and a nephew, Daia (Maximinus II Daia).

This decision was disastrous since two important candidates were passed over — Maximian’s son, Maxentius, and Constantius I’s eldest son Constantine I (later known as “the Great”). Added to this mix was Maximian’s desire to return to power, for he had unwillingly abdicated under pressure from Diocletian.

Galerius’ misstep sparked rebellions in Italy and the Western provinces in A.D. 306, which gave rise to a series of civil wars that persisted until A.D. 324, when Constantine I defeated his last opponent, Licinius. During this period the political landscape was complex and unstable. While this was unfortunate for the Romans, it is a bonanza for numismatists since coins illustrate many of the political, military, social and religious developments of the age.

The coinage of those 18 years is complex and interesting, and finding the more obscure items can be a real challenge. The good news, however, is that most of the coins are affordable and not too difficult to find, making this one of the best areas of ancient coinage to collect.