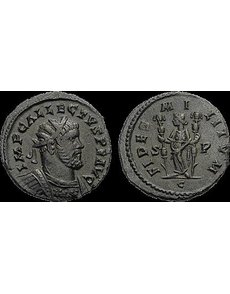 Billon double-denarius of Allectus, the successor of Carausius, bears the rebel’s portrait and calls for the continued loyalty of his army. 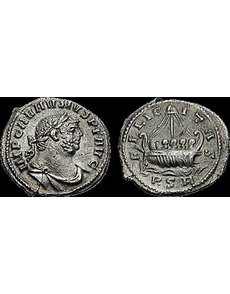 Silver denarius of Carausius bears the rebel’s burly portrait. The rsr beneath the galley is now thought to mean Redeunt Saturnia Regna (“The Golden Age returns”). 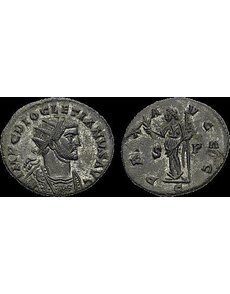 Though this billon double-denarius bears the name and portrait of the emperor Diocletian, it was actually struck in Britain by his rival, the rebel Carausius. 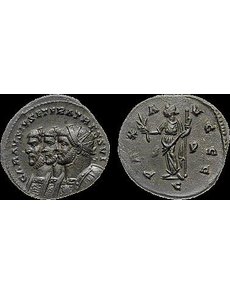 The busts of the emperors Diocletian and Maximian on this billon double-denarius appear alongside that of Carausius, the separatist emperor who issued the coin.

In the late third century A.D., the Roman Empire was especially vulnerable to barbarian invasion and to rebellion within the army. The western provinces became increasingly vulnerable as the focus of emperors shifted eastward to the Balkans and Asia. Once-prosperous Gaul, Spain and Romanized Germany became dangerous regions, guarded by a fraction of the soldiers such a vast area required.

Such was the backdrop for one of the most interesting revolts in Roman history — that of the naval commander Carausius. He was a man of great talent and humble origins, as were so many emperors of the era. He came from Menapia, a seafaring region between the Waal and the Scheldt rivers, which comprises the coastal regions of modern-day Netherlands, Belgium and northern France.

Menapia was a vulnerable region on the fringe of the Romanized world, and was subject to invasion by Germanic peoples. To make matters worse, a rise in the temperature of the ocean during the 270s caused flooding along much of the coastal plain, rendering it uninhabitable.

Carausius was trained as a sailor, and was apparently skilled in land warfare. He came to the attention of the emperor Maximian (286 to circa 310), who at that time co-ruled the Roman Empire with the senior emperor, Diocletian (284 to 305). Maximian immediately put Carausius to work fighting the Bagaudae (“the fighters”) — Gaulish peasants, army deserters and veterans who had banded together and turned to marauding.

After the defeat of the Bagaudae in early 286, Carausius likely remained in the emperor’s army or navy to help repel an invasion by the Alemanni and Burgundians, to defend the Rhine frontier, or to make punitive expeditions into Germany. In any case, Carausius’ performance was so good that Maximian soon promoted him to commander of the Channel Fleet with the mission of stopping Frankish and Saxon pirates from raiding the shores of Gaul and Britain.

The honeymoon ended in late 286 or early 287, when word reached Carausius that he would soon be arrested for engaging in the very piratic acts that Maximian had entrusted him to oppose. Whether Carausius was allowing pirates to make raids so he could claim a share of their booty upon capture, or this was an unjust charge from an enemy will never be known — all that mattered is that Maximian considered the charges true and acted accordingly.

Facing execution if captured, Carausius decided to use his fleet and his allies to stage a revolt that he would base in Britain, with heavily defended ports on the Gaulish coast. He immediately sailed to Britain and forged agreements with the Scots and the Picts, and even defeated an army fielded by the Roman governor Quintus Bassianus. This rebel had an outstanding knowledge of the English Channel, a network of allies, and would have command of a string of new fortresses along Britain’s Saxon shore. Best of all, Maximian would be bogged down with persistent, seasonal warfare on the Rhine.

Carausius soon began to strike coins to pay soldiers, procure supplies, support commerce and otherwise promote his fledgling regime. His coins were largely inspired by the current coins of the empire, though they displayed a distinctive style of die engraving and some innovative designs, and they bore the rebel’s name, titles and portrait.

Carausius used coinage to promote many of his ideas, including his desires to restore the former grandeur of Rome and forge a partnership with his rivals. However, Maximian and Diocletian had no interest in tolerating the rebel state, and they made efforts to undermine Carausius, including a failed invasion of Britain in 289, and perhaps another in 291.

In the spring of 293, the two emperors appointed deputy emperors. Maximian’s choice was Constantius I “Chlorus,” who bore the subordinate rank of Caesar and devoted himself to defeating Carausius. That very summer, he besieged and took control of Bolougne, Carausius’ stronghold on the mainland.

With the rebel state now restricted to the British Isles, the equation was changed. Upon escaping the siege, Carausius was murdered in Britain by his successor, Allectus, who proclaimed himself emperor. Precious little is known of the reign of Allectus (293 to 296) except that he issued a large coinage in his own name and subsequently died in battle against the forces of Constantius, who led an invasion of Britain in late 295 or early 296 by which he restored it to the Roman Empire.

The coinage of these two rebels is avidly collected and is of great interest from both the historical and numismatic points of view. Carausius struck his coins at several mints which, in the current view, include at least London (Londinium), Colchester (Camulondunum) and Rouen (Rotomagus).

Some of the most extraordinary coins reflect Carausius’ attempt to solicit a union with Diocletian and Maximian (or perhaps to deceive his own subjects into believing that such a union existed). Some of these coins actually bear the names and portraits of his rival emperors. Only some technical points, including the use of reverse inscriptions ending avggg (indicating three emperors: Carausius, Diocletian and Maximian), distinguish these coins from the official issues of those two emperors.

Even more remarkable is an issue that shows the busts of all three emperors. The obverse inscription caravsivs et fratres svi (“Carausius and his brothers”) reinforces the message of the three portraits, as do the reverse inscriptions, all of which end in avggg to indicate three emperors reigned.

The variety and historical interest of the coin types issued from 286/7 to 295/6 in the Romano-British Empire is impressive. With this brief survey we have merely scraped the surface of a subject that for centuries has been a source of great satisfaction to scholars and collectors, and no doubt will provide the same for future generations. ¦