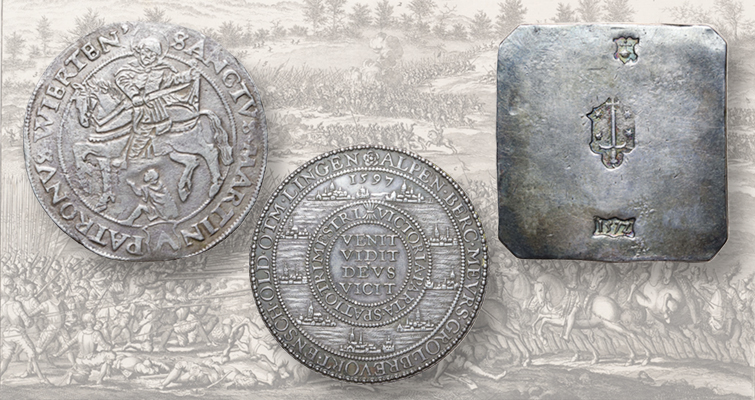 A specialist collection of numismatic items that traces the history of the Dutch Revolt or Eighty Years’ War and its combatants is coming to auction.

The Dutch Revolt or Eighty Years’ War was a series of battles fought in the Netherlands between 1568 and 1648 that began when part of the Habsburg Empire resisted what was, in their eyes, the unjust rule of the Spanish King Philip II.

A specialist collection of numismatic items that traces the history of the struggle and its combatants, with a particular focus on the political and satirical representations, is being offered for sale. World-Wide Coins of California’s mail-bid sale closing Nov. 15 features the Richard A. Jourdan Collection of coins and medals related to the Dutch Revolt against Spain.

The collection entails nearly 50 lots of tokens (jetons, in particular), medals and coins from across the Netherlands. The conflict, like many in history, was a struggle for power with religious overtones.

The conflict is traditionally said to have begun in June 1568, when the Spanish executed Counts Egmont and Horne in Brussels; however, tensions were simmering even earlier. Calvinism (a Dutch iteration of Protestantism) was adopted in the region, but the Spanish enforced the dominant power structure of the Catholic Church.

A series of related uprisings and wars, taken together, constitute the Dutch Revolt. For the most part, the outcome was settled by the Twelve Year Truce in 1609, but officially the war between the United Provinces of the Netherlands (Dutch Republic) and the Kingdom of Spain did not end until the Peace of Münster, part of the Peace of Westphalia, in 1648.

The war, its causes, events and the aftermath are subject of multiple volumes of research. Suffice it to say that lengthy study could enrich one’s understanding of the combatants, causes and celebrations.

Pieces in the auction range from the affordable to the rare.

One rare piece marks the tipping point of the conflict.

The undated silver daalder of 1540 to 1568 was issued for Philip of Montmorency, a knight of the Golden Fleece. He was a ranking official in the court of Spain’s King Philip II, the ruler whose reign oversaw the beginning of the fighting.

Montmorency later protested the Spanish Inquisition in the Netherlands, and was arrested by the newly named regent, the Duke of Alba. Alba had Montmorency (along with the Count of Egmont) executed in the Grand Palace of Brussels, on June 5, 1568. This brutal act was the tipping point that started the war.

The Very Fine coin has “rough surfaces” and an estimate of $300.

Another highlight is the silver medal from 1597 that honors the victory at Turnhout (a Belgian municipality in Antwerp).

Maurice, Prince of Orange, led combined Allied forces to victory, as reflected on the medal’s obverse, which shows the Spanish army being driven from the field of battle.

The reverse records a view of the nine towns captured from the Spanish in three months, and the central legend mocks a similar legend on a medal from 1596 praising Archduke Albert of Hapsburg for the three victories over the Dutch in 1595.

The toned Extremely Fine medal has an estimate of $1,000.

Another highlight is the 1572 siege daalder of 32 stuivers from Haarlem.

Haarlem (yes, the lexicographical inspiration for the area of New York City) was besieged by the Spanish under the Duke of Alba from December 1572 until its surrender in July 1573. The citizens were allowed to ransom themselves but the defending garrison along with the resistance leaders were almost entirely executed, some by drowning, because the Spanish had run out of ammunition during the siege.

The toned EF coin has an estimate of $3,500. The full catalog can be obtained from the auction house. The firm does not have a website, but may be emailed at elmen@sonic.net. 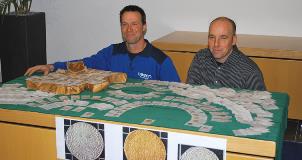 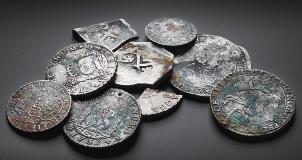