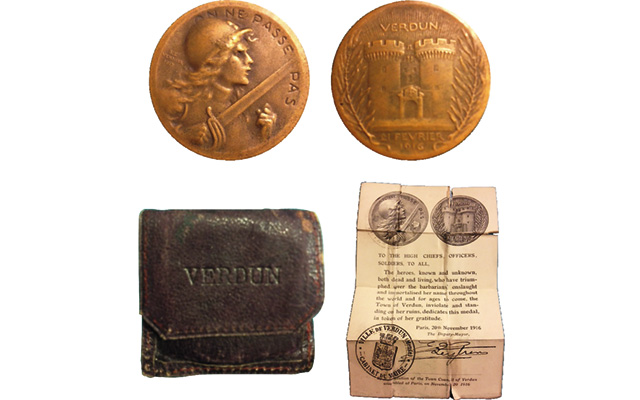 A reader’s family member may have obtained this Battle of Verdun medal while in France. The medal was issued by the city in gratitude for those who fought to defend it in 1916.

This Verdun coin, as my mother called it, has been in my family for some time. I am not sure which of our line brought it back from France, but it was likely my grandmother or her mother.

I understand that this is a medal, and suspect it is commemorative. I don’t see a mechanism for wearing it on a uniform. It has been stored in a pouch and seems in good shape, but how should I store it to keep the leather pouch from deteriorating?

When and how many were made? How were they distributed? What is its value?

The reader provided images of the 1916 Verdun medal, an official issue of the city of Verdun that was struck by the Paris Mint.

The Battle of Verdun stretched from Feb. 21 to Dec. 15, 1916, and was one of the most important battles of World War I — and certainly the longest. French and German armies waged war north of Verdun in northeastern France for an ultimate stalemate. When battle ended, the toll on both sides was more than 250,000 dead and 500,000 wounded.

The medal was ordered Nov. 20, 1916, by the Municipal Council of Verdun, in honor of the city’s defense.

The medal designer was sculptor Emile Seraphin Vernier, the prolific artist whose name appears with the 1917 date on the obverse, along with a personification of Marianne (representing the French Republic).It also shows the phrase ILS NE PASSERONT PAS (“They shall not pass”) from Gen. Robert Nivelle’s June 23, 1916, speech to his troops.

The medal was originally to be awarded only to those on the Verdun Front between Feb. 23 and Nov. 2, 1916, but it was eventually extended to all those who fought anywhere in the Argonne and St. Mihiel sectors between July 31, 1914, and Nov. 11, 1918.

As for storage, since leather is potentially corrosive, the medal should be removed from its pouch and placed in a safer holder.

The medal is common in bronze, especially with loops for suspension. Online sales suggest either version of the medal is worth between $15 and $50.