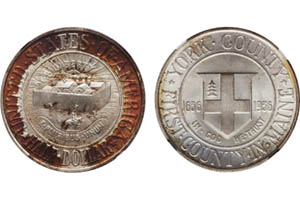 It is an issue that “comes nice” and many surviving examples from the original mintage of 25,015 are preserved in high grades. This example graded Mint State 67+ with both a Numismatic Guaranty Corp. Star for eye appeal and a Certified Acceptance Corp. sticker indicating quality within the grade brought just under $1,000 at Heritage’s Feb. 28 American Numismatic Association National Money Show auction. It has what’s called “tab toning,” which is a result of its original packaging and is considered a sign of originality that is coveted by many collectors.