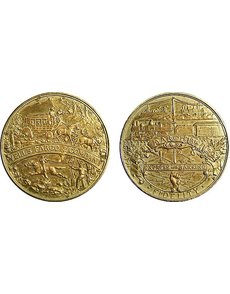 What can you tell me about this Wells Fargo medal?

The piece in question appears to be a medal commissioned by the Wells Fargo & Co. for its semicentennial in 1902.

According to So-Called Dollars by Harold E. Hibler and Charles V. Kappen, the silver medal was presented “on or about” March 18, 1902. It was given to employees who had been with the company for one year or more.

Neither the designer nor striker of the 40-millimeter diameter medal is known. So-Called Dollars classifies the medal as Hibler-Kappen 296.

Mr. Link’s medal appears to be in Uncirculated condition, with moderate spotting and light, even toning. It has no edge inscription. It is encased within its original presentation case, which Hibler and Kappen describe as a “dark maroon leatherette jeweler’s box,” lined with blue velvet and satin.

Three medals, none in their original presentation cases, sold at a Heritage auction Sept. 27, 2007. One, graded Mint State 65 by Numismatic Guaranty Corp., sold for $1,265. A second, graded MS-64 by NGC, sold for $862.50. A third, an About Uncirculated Details piece — improperly cleaned and possessing rim damage — sold for $345.

As the medal is scarcer in its original presentation case, Mr. Link will need to think carefully about whether or not to have it encapsulated, but it is recommended that he have it authenticated as genuine by an expert.