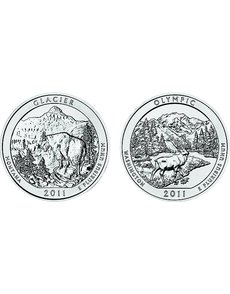 Official launch ceremony dates for the second and third America the Beautiful quarter dollars to be issued in 2011 have been set.

A coin collector forum with U.S. Mint representatives is scheduled at 5 p.m. April 12 in the Glacier National Park Community Building at park headquarters in West Glacier, Mont. The facility is off Highway 2 in West Glacier.

The bank conducting the coin exchange will be Freedom Bank from Columbia Falls. The bank will impose a one-roll minimum and 10-roll maximum purchase per customer per pass through the line, while coin supplies last.

Numismatic bags and two-roll sets of circulation-quality coins for both pieces will go on sale from the U.S. Mint at noon Eastern Time the same day each issue is slated for Fed release. ¦