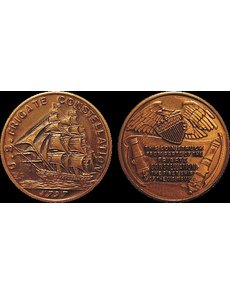 Let me tell you a story that will point out the importance of doing your research before making any numismatic purchase. But first I must give you a short history lesson.

With the Naval Act of 1794 Congress created the U.S. Navy and authorized the construction of six frigates. The first one to put to sea was the US Frigate Constellation in 1797; it was the first ship of the U.S. Navy and the first U.S. ship to engage and defeat an enemy vessel. It was decommissioned and broken up for scrap on June 25, 1853, at the Gosport Navy Yard in Norfolk, Va.

In the same yard, construction was started on a new ship, a sloop-of-war, which would bear the same name. This second ship was named the USS Constellation and was launched on 26 August 1854. It was the last sail-only warship built by the U.S. Navy. It was decommissioned on Feb. 4, 1955, and taken to its permanent berth in Baltimore’s inner harbor.

Now here is where the plot thickens. In 1955 the city of Baltimore started promoting the second ship as a rebuild of the original 1797 frigate. The city issued medals and sold them for $1 each to raise money to restore the ship and turn it into a museum.

On the reverse of the Constellation medal it states THIS COIN STRUCK FROM PARTS OF THE FRIGATE CONSTELLATION THE FIRST SHIP OF THE US NAVY.

The promotion caught the attention of historians and a heated debate began. The controversy continued until 1999, when evidence was uncovered during the restoration that conclusively proved it was the ship launched in 1854. What the city of Baltimore had was the sloop-of-war that was a completely new design and built new from the keel up. Its name was the only connection to the original frigate launched in 1797.

Now begins the story of what happens when you don’t do the research first. Recently, I stumbled upon one of the medals issued in 1955. After reading the notation on the reverse I was impressed with the historical significance of the piece and bought it. Then I did the research and found out the facts. I was very disappointed to say the least. There may still be some parts of the 1797 frigate Constellation that have survived in some form or another, but none of them are in the medal that I purchased. Had I done the research first, I would not have bought the item. But now that I have the medal, it does make an interesting story.

The bottom line is I didn’t know what I had, but then, neither did the city of Baltimore. The promotional claim was not an outright lie, as that would imply intent to defraud. It was a case on not doing research, the same thing I am guilty of.

Richard Graff is a numismatist living in Oregon who has been collecting coins for more than 50 years.