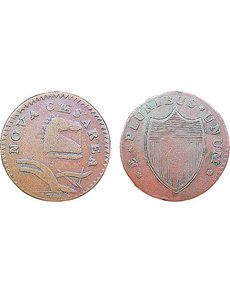 An extremely rare New Jersey copper sold for $105,655.55 on eBay on Feb. 6, setting a new mark for the highest price a U.S. Colonial issue has achieved on the online auction site.

According to one source, the price realized was the highest for any coin ever sold on eBay.

The 1786 coin is a newly discovered example of the Maris 18-L variety, a die combination that was previously believed to be unique, or represented by a single surviving example. The eBay coin now makes a total population of two.

The coin just sold, graded Very Fine 35 by Professional Coin Grading Service, is the finest known by a significant margin. The only previously known example, once the property of Dr. Edward Maris himself, was graded Very Good in its last auction appearance in 1984.

New Jersey coppers are avidly collected by die variety, following the work done by Maris in his A Historical Sketch of the Coins of New Jersey, published in 1881. Rare die varieties in the series have brought substantial premiums over common ones for well over a century. The record for any New Jersey copper sold at auction is $322,000, a price realized for the 1786 Date Under Plowbeam, Maris 7-E, in the 2003 Stack’s auction of the John J. Ford Jr. Collection of New Jersey Coppers.

Typical by all appearances

The Maris 18-L is, by all appearances, a typical New Jersey copper. It is not a Date Under Plowbeam nor one of the other distinctive major types in the series. As a variety listed in A Guide Book of United States Coins, it falls under the “Bridle” descriptor that in almost all cases refers to the Maris 18-M variety.

While the obverse die is the same, the reverse die is different for the Maris 18-L and 18-M marriages, thus producing a die variety that is among the most desirable in the New Jersey series. The L reverse die is usually found combined with Maris obverse 16, the so-called “Protruding Tongue” obverse. Maris obverse 18 is found married to reverses J, L, M and N; of these, only 18-M is considered common.

The Maris 18-L coin sold on eBay was described as “an exceptionally nice specimen with light brown surfaces showing light even wear for the grade without the usual imperfections of a colonial coin” in its online auction description. The New Jersey copper was submitted to the American Numismatic Association Certification Service circa 1986 and assigned a grade of Very Fine. The ANACS certificate was sold along with the coin.

The new owner of the coin, a long-time collector of Colonial issues who wishes to remain anonymous, noted “while there are a handful of New Jersey super rarities, there are very few in this kind of choice condition.”

Collectors who pursue New Jersey coppers vigorously enough to include Rarity 7 (four to 12 known) and Rarity 8 (one to three known) coins in their collection are accustomed to acquiring low-grade problem coins. For many of the rarest New Jersey varieties, low quality examples are literally the only ones known.

While many new varieties have been discovered since Maris wrote in 1881 — and several entirely new dies have been located as well — the Maris 18-L variety has been known since the master work was published.

Maris owned the discovery coin, which was acquired with the rest of the Maris Collection by T. Harrison Garrett in 1886. That coin remained in the Garrett Collection until the early 1970s, when it was purchased privately by Colonial coin expert Richard Picker. The piece sold for $2,090 in the 1984 Stack’s auction of Picker’s Colonial coin collection, when it was acquired by a well-known specialist.

At the time, the Maris-Garrett-Picker coin was cataloged as “believed to be only the second known,” a description that puzzled many New Jersey specialists who prior to that auction had never heard so much as a rumor of a second example.

While the owner of this coin has known its variety attribution for decades, it appears that the coin’s discovery was never made known to specialists in the series. When this coin first turned up on eBay, New Jersey copper specialists theorized that this was the long-rumored second example mentioned by Stack’s cataloger David Sonderman in 1984. The coin was placed on eBay by Dick Dorloff, a Portsmouth, N.H., coin dealer, who started his rare coin business in 1954. While longtime collectors interviewed for this story recall Dorloff at small shows throughout the Northeast, none recall him mentioning the existence of this rare New Jersey coin.

Dorloff, despite several attempts, could not be reached for comment.

The origin of the “second specimen” rumor appears to trace back to Walter Breen’s unpublished 1955 manuscript on New Jersey coppers, copies of which ended up in the libraries of several specialists though the book was never published. In it, Breen mentions that Maris described the 18-L variety in 1881 as “only two known.” In fact, Maris stated that he had seen just one, which was in his collection and had been discovered in Philadelphia. Both his 1881 A Historical Sketch of the Coins of New Jersey and the 1886 sale catalog he wrote of his own collection describe the 18-L as unique.

Breen’s misquote seems to have spawned the early rumors of a second example, rumors that by happenstance came true some 55 years later.

The Maris 18-L is “one of the few New Jerseys that collectors today have not had the opportunity to acquire,” noted New Jersey copper specialist Michael Wierzba, in discussing the appearance of the second example. The variety was missing from the Boyd-Ford collection, which included 121 of the 146 generally acknowledged varieties.

The Maris 18-L variety takes on special importance as a variety that was unique when Maris wrote his catalog and that remained so until the recent discovery.

Twenty die varieties were considered unique by Maris (two others have been since delisted). Of those twenty, only three remained unique until modern times. Three of the 20 have now slipped as far as Rarity-5+, indicating a population of 31 to 40 known. Now, just two of Maris’ unique varieties remain so.

While permanent records of coins sold on eBay since the auction site launched more than a decade ago are sketchy, no Colonial specialist recalls any pre-Federal coin selling for a sum even close to the $100,000 mark.

One Web site, found at www.whatsellsbest.com, lists the top 10 most expensive coins sold on eBay, and the Maris 18-L ranks as the highest by nearly a factor of two. The runner-up was a 1795 Capped Bust gold $5 half eagle graded Mint State 60 by Numismatic Guaranty Corp. that brought $57,301 in January 2010.

New Jersey authorized a state copper coinage on June 1, 1786, using authority it held under the Articles of Confederation, the framework for the new United States. The Articles granted both the individual states and the federal government authority to issue coinage. ¦