Presidential campaigns and tokens enter into a marriage 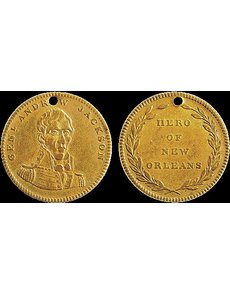 This Andrew Jackson piece for the 1824 presidential election is considered one of the first political campaign tokens. Such metallic tokens became commonplace in subsequent elections.

With Election Day fast approaching, I cannot help but think about the emergence of the United States’ two-party system and the wonderful niche within history and numismatics that it helped create: the 19th century campaign token. If you ask any of my students what my favorite part of American history is, most would say the presidents after looking around my classroom, which is adorned with campaign posters. With my use of numismatics in the classroom at regular intervals, how can I resist merging my two favorite things within my own classroom — campaign history and tokens?

Presidentially speaking, political support tokens stretch back as far as George Washington in the United States, though most of these early pieces were issued as commemoratives. The first truly contested election complete with some heated campaigning was in 1800 between John Adams and Thomas Jefferson, but no tokens were used to show support for either one during the campaign. It was not until the election of 1824 with the primary candidate being Andrew Jackson staked against John Quincy Adams that the marriage between presidential campaigns and tokens would occur.

The environment that gave rise to the campaign token resulted in part from two things: the re-emergence of a new, strong two-party system in 1824, after nearly 24 years of the prior parties’ steady decline, and the fact that the United States was finally industrialized and specialized enough to have diesinkers to actually produce private tokens. The lack of the necessary infrastructure is why, in the late 18th and early 19th centuries, most American-related tokens came from England.

The first true presidential campaign tokens — pieces designed to attract voters to a candidate — are often acknowledged as being the Andrew Jackson tokens with his likeness on the obverse and the HERO OF NEW ORLEANS or some such inscription on the reverse issued for the 1824 presidential campaign. These tokens connect the candidate to his victory during the War of 1812 at the aforesaid battle in 1815. This practice of using tokens of the early Jacksonian Democrats revolutionized the American campaign scene for the rest of history.

To balance the strength those tokens were providing to the Democrats, the Whig Party, established in 1833 to contest everything Jackson represented, started to issue slanderous tokens against Jackson, thus giving rise to the exciting field of political Hard Times tokens from 1833 to 1843.

Following suit, nearly all political parties founded to nominate a presidential candidate from 1828 to 1896 would create supportive or slanderous tokens to further their political messages. In the fashion of a walking billboard, many people would have the tokens holed and hung from their lapels to show support for their candidate.

So where has the practice of using these tokens gone? Well, by 1900 most had disappeared, to give way to celluloid pins. However, pre-1900 tokens are plentiful and a person can learn lots from these tokens about the candidates, the political parties and the citizens who voted for them during these periods of time by considering various questions: How have the general concerns within our nation changed over time, evident from the campaign slogans? How did values and patterns within society and the economy shape the constituencies of the political parties? Who did these candidates really represent?

Just as we look back on previous elections, how will the citizens of tomorrow view our choices we make during this election? These are all entertaining and relevant questions for ourselves and our students to reflect upon as the election draws near.