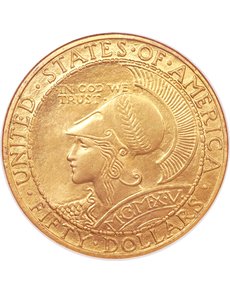 Four examples of the famous Panama-Pacific $50 commemorative highlight the offerings in Heritage Auctions’ 2013 February 7-8 & 10 US Coin Signature Auction in Long Beach. This auction is open for bidding now at www.ha.com/coins.

As most numismatists know, there are two distinct varieties of the Panama-Pacific $50 coin. The round variety is rarer, with only 483 distributed, and it is represented in this auction by examples in both MS65and MS66. Only four pieces have been graded finer than MS66 by the major grading services combined. The popular octagonal variety, the only octagonal US coin issue, is almost as rare, with 645 examples issued. It is represented by examples in MS63and MS64.

Continuing with the theme of rarities offered in pairs, this auction also contains two examples of the proof 1876 double eagle, graded Proof 63 Cameo and Proof 64+ Deep Cameo. The latter coin is the finest graded by PCGS, and once resided in the Pittman collection. Only 45 examples were minted, and perhaps a third of that number survives today.

Bid on these and the rest of the coins in the February Heritage Long Beach US Coins auction at www.ha.com/coins.