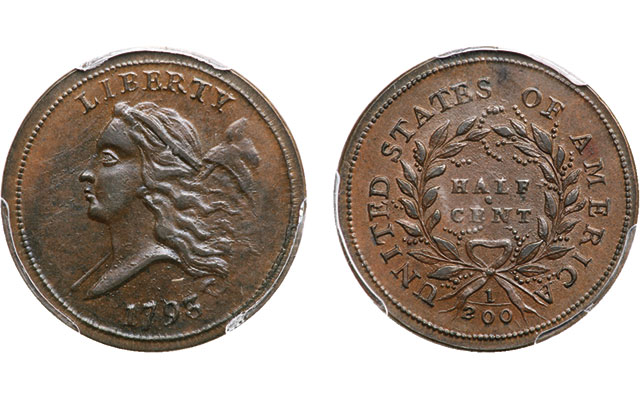 The half cent was from the famed Missouri Cabinet, which Ira & Larry Goldberg Auctioneers with Bob Grellman & Chris McCawley, The Copper Specialists, sold in January 2014. However, this single coin was misplaced and subsequently “rediscovered” after the 2014 sale.

The piece exceeded its estimate of $80,000 and up. Its “Choice lustrous medium brown and chocolate” surfaces were described as “nearly flawless and the eye appeal is outstanding for the grade.”

The firms added, “The only imperfections are a microscopic planchet chip on the rim at the top of the reverse and an even smaller chip just inside the border beads over the left side of the O in OF, both as struck, plus a hint of reddish carbon at the right side of the first A in AMERICA.”

Like many pieces in the Missouri Cabinet, it had a long ownership history, which included passing through the hands of Henry Chapman, Hillyer Cooper Ryder, Wayte Raymond, and other collectors.

It was purchased on April 20, 1976, for the Missouri Cabinet from dealer Joe Flynn & Son Rare Coins Inc., and the Jan. 25 auction was the first public offering of this coin for a generation.

Cataloged as an example of the Cohen 2 variety, the variety is not itself rare. However, it is the finest of only two examples of this variety graded Mint State and is in demand from collectors as a one-year type coin.

A much lower-grade example of the C-2 variety in the Goldberg sale, graded About Good 3 by the firm, brought $999 against an estimate of $600 and up.