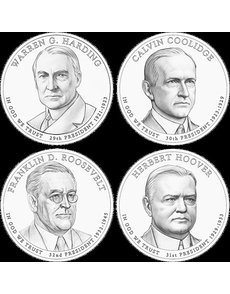 Designs given final approval by former Deputy Treasury Secretary Neal S. Wolin for the four 2014 Presidential dollars have been released by the United States Mint.

The presidents to be honored are:

The four obverse portraits will be paired individually with the common Statue of Liberty reverse introduced for the Presidential Dollar Coin Program in 2007. The common reverse was designed and sculptured by U.S. Mint Sculptor-Engraver Donald Everhart II.

While examples of all four 2014 dollars will be struck in circulation-quality, none will be released into general circulation.

The last Presidential dollar struck for release into general circulation was the 2011 James A. Garfield dollar.

Circulation quality 2014 Presidential dollars will be offered in bags, rolls and boxes of rolled coins, with Proof and Uncirculated finish coins designated for a number of collector sets and other packaging options. ¦